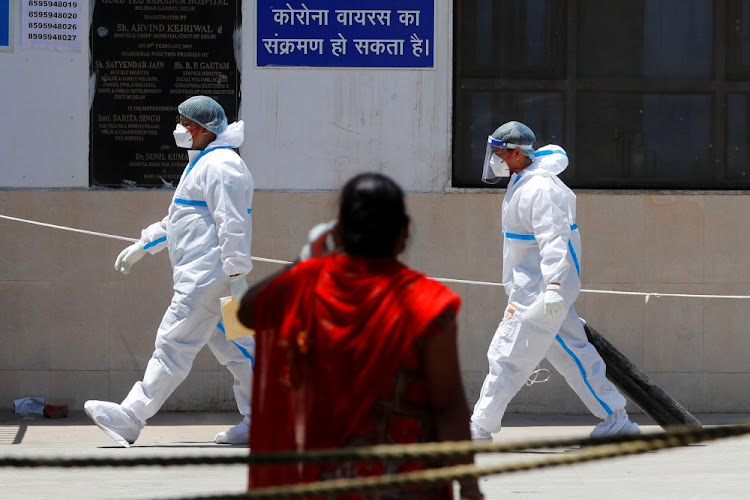 India is in the grip of a second wave of the pandemic, hitting a rate of one Covid-19 death in just under every four minutes in Delhi as the capital's underfunded health system buckles.
Image: REUTERS/Adnan Abidi

The Indian government asked social media platform Twitter to take down dozens of tweets, including some by local lawmakers, that were critical of its handling of the coronavirus outbreak, as cases of Covid-19 again hit a world record.

Twitter has withheld some of the tweets after the legal request by the Indian government, a company spokeswoman told Reuters on Saturday.

The government made an emergency order to censor the tweets, Twitter disclosed on Lumen database, a Harvard University project.

India's Information Technology ministry did not respond to a request for comment.

In the government's request, dated April 23 and disclosed on Lumen, 21 tweets were mentioned. Among them were tweets from a lawmaker named Revnath Reddy, a minister in the state of West Bengal named Moloy Ghatak and a filmmaker named Avinash Das.

In its request, the government cited the Information Technology Act of 2000, according to Lumen. Reuters was unable to independently confirm Lumen's information.

India has, in the past, used the IT Act to block information in a bid to protect the "sovereignty and integrity of India" and maintain public order, among other things.

Last June, India invoked the IT Act to ban video app TikTok and 58 other Chinese apps, saying they were prejudicial to India's sovereignty and integrity as well as to the "security of state and public order".

India and Twitter locked horns in February when the US social media giant did not fully comply with a government order to take down over 1,100 accounts and posts that New Delhi said spread misinformation about farmer protests against new agriculture reforms. Twitter later blocked access to the bulk of accounts it was ordered to take down, an IT ministry source told Reuters previously.

"When we receive a valid legal request, we review it under both the Twitter Rules and local law," the Twitter spokeswoman said in an emailed statement on Saturday.

"If the content violates Twitter's rules, the content will be removed from the service. If it is determined to be illegal in a particular jurisdiction, but not in violation of the Twitter Rules, we may withhold access to the content in India only," she said.

The spokeswoman confirmed that Twitter had notified account holders directly about withholding their content and let them know that it received a legal order pertaining to their tweets.

Asked about the request, White House press secretary Jen Psaki said on Monday: "That certainly wouldn't be aligned with our view of freedom of speech around the world."

The development was reported earlier by technology news website TechCrunch, which said that Twitter was not the only platform affected by the order.

UK to ship ventilators and other devices to Covid-ravaged India

Britain said on Sunday it was sending more than 600 medical devices including oxygen concentrators and ventilators to India to help the country as it ...
News
1 year ago

India is in the grip of a second wave of the pandemic, hitting a rate of one Covid-19 death in just under every four minutes in Delhi as the capital's underfunded health system buckles. Criticism is mounting that Prime Minister Narendra Modi's federal government and state authorities have not prepared adequately to handle the crisis.

Some health experts said India became complacent in the winter, when new cases were running at about 10,000 a day and seemed to be under control. Authorities lifted restrictions, allowing the resumption of big gatherings, including large festivals and political rallies for local elections.

India's health minister said earlier this month that activities such as elections, religious gatherings and a lack of mask-wearing at functions such as weddings had contributed to a surge in cases.