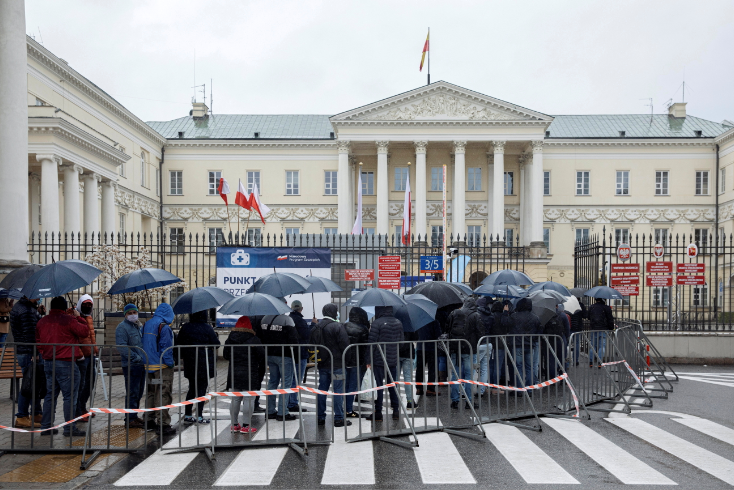 People queue at a mobile vaccination point against coronavirus disease in Warsaw, organised for the long weekend in several Polish cities on May 2 2021.
Image: Dawid Zuchowicz/Agencja Gazeta via REUTERS

For Poles, the May long weekend is usually a time for grilling, socialising and drinking. But in the middle of a pandemic, thousands decided to stand in the rain to get a Johnson & Johnson jab instead.

Queues snaked around street corners in cities like Warsaw, Krakow and Wroclaw, with some lining up as early as 1 a.m., according to media reports, as the government offered the one-dose vaccine for all comers aged 36 or over.

The campaign comes as Poland has endured a third wave of the pandemic, with new cases topping 30,000 a day and almost 1,000 daily deaths.

"Hopefully, we will contribute to bringing the life back to how it used to be," said Karolina from Lodz, who came to a local vaccination centre while walking her dog.

She said one of the things that convinced her was the fact that it was a single-dose vaccine.

The health ministry did not respond to a Reuters request for information on how many vaccines were administered over the weekend. Centres will remain open until 6 p.m.

Last week Poland administrated 1.6 million doses, for a total of nearly 12 million since vaccinations began. Nearly 3 million Poles, 7,7% of the population, have been fully vaccinated.