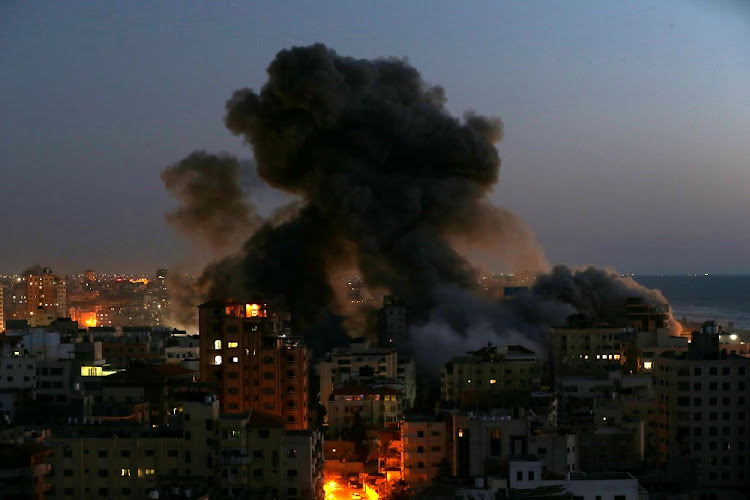 Smoke rises from a building after it was destroyed by Israeli air strikes amid a flare-up of Israeli-Palestinian violence, in Gaza May 11 2021.
Image: REUTERS/Ibraheem Abu Mustafa

A 13-storey residential block in the Gaza Strip collapsed on Tuesday night after being hit by an Israeli air strike, witnesses said.

Video footage showed three plumes of thick smoke rising from the tower, its upper storeys still intact until it collapsed to the ground. The tower houses an office that is used by the political leadership of Gaza's Islamist rulers Hamas.

Electricity in the area around the building went out after the collapse. Residents were using flashlights to search for personal belongings nearby.

Israel had sent 80 jets to bomb Gaza on Tuesday and massed tanks on the border as rocket barrages hit Israeli towns for a second day, deepening a conflict in which at least 28 people in the Palestinian enclave and two in Israel have been killed.

The most serious outbreak of fighting since 2019 between Israel and armed factions in Gaza was triggered by clashes between Palestinians and Israeli police at Jerusalem's al-Aqsa Mosque on Monday.

Palestinian militants fired rocket barrages into Israel from Gaza for a second day on Tuesday and Israeli warplanes struck the enclave in a deepening ...
News
1 year ago

Residents of the tower and people living nearby had been warned to evacuate the area around an hour before the air strike, according to witnesses. It was not immediately clear if the building had been fully evacuated, or if there were casualties.

The holy city of Jerusalem has been tense during the Muslim fasting month of Ramadan, with the threat of a court ruling evicting Palestinians from homes claimed by Jewish settlers adding to the friction.

Prime Minister Benjamin Netanyahu said Israel would step up its strikes on Gaza, an enclave of 2 million people, in response to the rocket attacks, which carried on into the early evening.

Within an hour, Israel said it had deployed 80 jets to bomb rocket launch sites in and around Gaza City. Plumes of smoke rose from densely populated residential areas.

The European Union condemned Palestinian rocket attacks into Israel, calling on all sides to aim for a de-escalation and to prevent further civilian ...
News
1 year ago

Officials said infantry and armour were being dispatched to reinforce the tanks already gathered on the border, evoking memories of the last Israeli ground incursion into Gaza to stop rocket attacks, in 2014.

More than 2,100 Gazans were killed in the seven-week war that followed, according to the Gaza health ministry, along with 73 Israelis, and thousands of homes in Gaza razed.

On Tuesday, before the block collapsed, the Gaza health ministry said at least 28 Palestinians, including 10 children, had been killed and 152 wounded by Israeli strikes since Hamas on Monday fired rockets towards Jerusalem for the first time since 2014.

Israel's national ambulance service said two women had been killed in rocket strikes on the southern city of Ashkelon.

The International Committee of the Red Cross (ICRC) urged all sides to step back, and reminded them of the requirement in international law to try to avoid civilian casualties.

French Foreign Minister Jean-Yves Le Drian condemned the rocket attacks from Gaza into Israel but also said he was concerned at the threat of forced eviction of Palestinian residents in the Sheikh Jarrah neighbourhood of East Jerusalem.