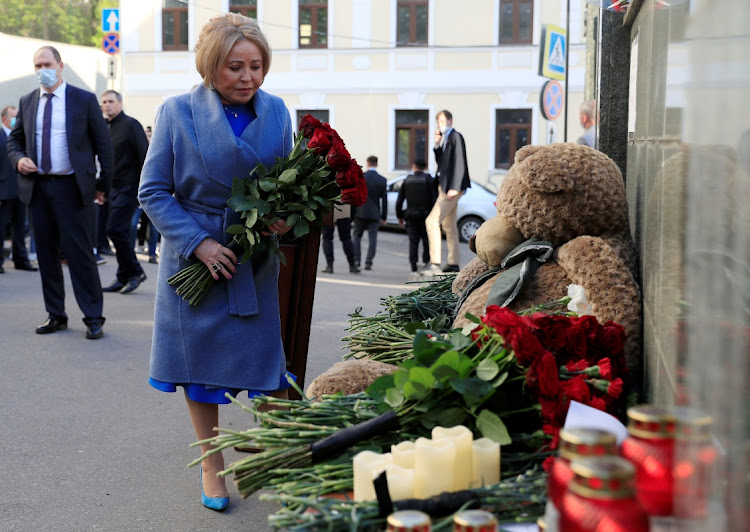 Chairwoman of the Russian Federation Council Valentina Matviyenko lays flowers at a makeshift memorial outside the representative office of the Republic of Tatarstan to commemorate victims of the deadly shooting in Kazan School Number 175, in Moscow, Russia on May 11, 2021.
Image: REUTERS/ Evgenia Novozhenina

Nine people, including seven children, were killed on Tuesday and many more badly wounded after a lone teenage gunman opened fire in a school in the Russian city of Kazan, local authorities said, prompting a Kremlin call for tighter gun controls.

Two children could be seen leaping from the third floor of the four-storey School Number 175 to escape as gunshots rang out, in a video filmed by an onlooker that was circulated by Russia's RIA news agency.

“We heard the sounds of explosions at the beginning of the second lesson. All the teachers locked the children in the classrooms. The shooting was on the third floor,” said one teacher, quoted by Tatar Inform, a local media outlet.

Calling the attack a tragedy for the country, Rustam Minnikhanov, the head of the wider Tatarstan region, said there was no evidence that anyone else had been involved.

“We have lost seven children — four boys and three girls. We also lost a teacher. And we lost one more female staff worker,” he said in a video address.

“The terrorist has been arrested. He's a 19-year-old who was officially registered as a gun owner,” he said. He said the victims were in the eighth year of school, which in Russia would make them around 14 or 15 years old.

Russia's Investigative Committee, which investigates major crimes, said in a statement it had opened a criminal case into the shooting and that the identity of the detained attacker had been established.

Reuters could not immediately contact a lawyer for the suspect, who was named in Russian media but whose identity was not officially disclosed, standard practice in Russia until a suspect has been formally charged.

Footage posted on social media showed a young man being pinned to the ground outside the school by police officers.

State TV later broadcast a separate video showing what it said was the suspect, a young man stripped to the waist and under restraint, being questioned by investigators. He could be heard saying that “a monster” had awoken in him, that he had realised that he was a god, and had begun to hate everyone.

The incident was Russia's deadliest school shooting since 2018 when a student at a college in Russian-annexed Crimea killed 20 people before turning his gun on himself.

At least 11 people have been killed and many more wounded after one or more gunmen opened fire in a school in the Russian city of Kazan, the RIA news ...
News
2 months ago

A social media account called “God”, which Russian media said belonged to the suspect, was blocked by the Telegram messaging service citing its rules prohibiting what it described as “calls to violence”.

The account, created before the shooting, contained posts in which a young masked and bespectacled man described himself as a god and said he planned to kill a “huge number” of people and himself. Reuters could not independently confirm whether the account belonged to the detained suspect.

Minnikhanov, the regional leader, said 18 children were in hospital with a range of injuries, including gunshot wounds and broken and fractured bones. Three adults with gunshot wounds were also in hospital, he said, saying doctors were doing all they could to save the lives of those wounded.

Footage showed a corridor inside the school strewn with debris, including smashed glass and broken doors. Another still image showed a body on the floor of a bloodstained classroom.

Russia has strict restrictions on civilian firearm ownership, but some categories of guns are available for purchase for hunting, self-defence or sport, once would-be owners have passed tests and met other requirements.

President Vladimir Putin ordered the head of the national guard to draw up tighter gun regulations, the Kremlin said. The guards would urgently look into the status of weapons that can be registered for hunting in Russia but are considered assault weapons elsewhere.

The suspect had been issued a permit for a Hatsan Escort PS shotgun on April 28, Alexander Khinshtein, a lawmaker in the lower house of parliament, wrote on social media. He gave no further details and Reuters was not able to confirm this independently.

Kazan is the capital of the Muslim-majority region of Tatarstan and located around 725km east of Moscow.