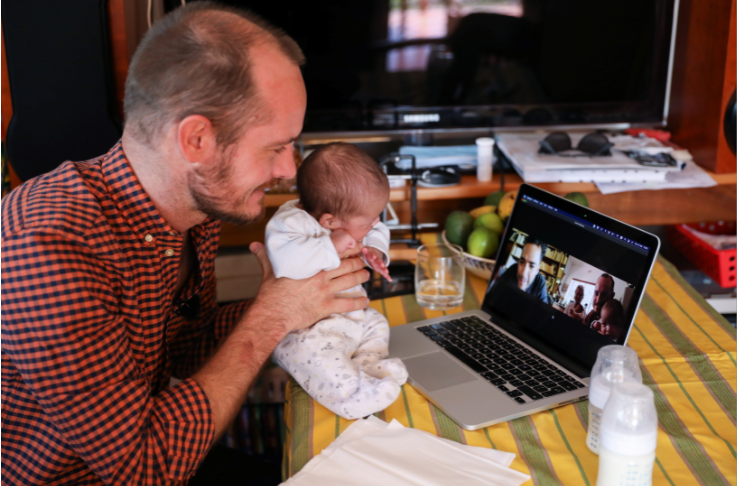 Namibian citizen Phillip Luhl holds one of his twin daughters as he speaks to his Mexican husband Guillermo Delgado via Zoom meeting in Johannesburg, South Africa, on April 13 2021.
Image: REUTERS/ SIPHIWE SIBEKO

Namibia on Tuesday issued emergency travel documents to the twin daughters of a gay couple who have been battling to take them home following their birth to a surrogate in South Africa, one of the fathers told Reuters.

Namibian Phillip Luhl and his Mexican husband Guillermo Delgado had already been fighting for citizenship for their two-year-old son when the twins, born in March, were refused the documents required to enter Namibia. Namibian authorities say Luhl must prove a genetic link to the children.

Namibia’s high court on Monday ruled against a gay couple battling to obtain travel documents for their twin daughters, born to a surrogate in SA, ...
Africa
2 months ago

Under a new home affairs minister, Albert Kawana, appointed in a cabinet reshuffle later in April, the ministry opted not to oppose the application.

Instead, Kawana instructed the department to issue the twins with emergency travel documents that will allow them to enter Namibia, but not leave, Luhl said.

“It's quite sad that it takes so much emotional, financial disruption to our lives in order to get a simple bureaucratic decision taken that allows us to be together as a family,” Luhl said.

The couple's son, Yona, was issued with an emergency passport two weeks ago, and they would now seek the same for the twins, Luhl continued.

Namibia's home affairs ministry confirmed it had issued the documents but said the move had no bearing on Yona's citizenship case and did not confer citizenship on the twins either.

A 32-year-old gay man from Sasolburg in the Free State said he is hurt and disappointed that there are people in SA who hate and attack others for ...
News
1 month ago

“The issuance must not be construed to be a concession on the minister's part that the twins are Namibian citizens,” it said, adding it awaited the judgement of the court on the requirement that Luhl prove his genetic link to Yona.

Namibia's legal system does not recognise same-sex marriages and criminalises sexual contact between men, though the law is seldom enforced.