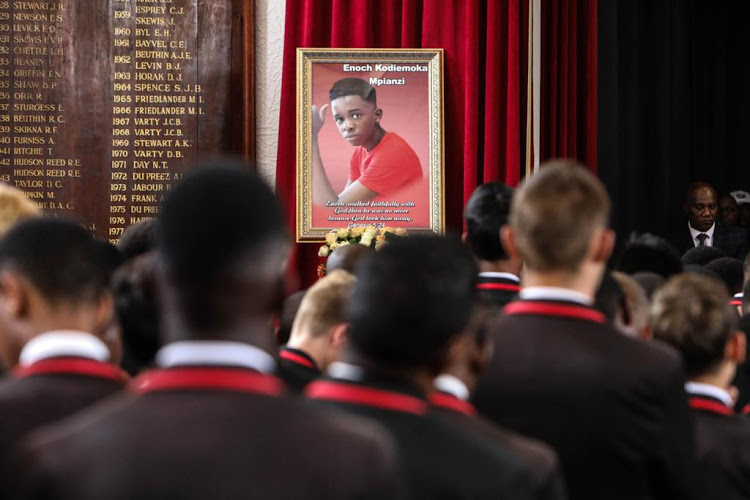 Pupils attend the memorial service for Enock Mpianzi at Parktown Boys' High shortly after the pupil drowned at a school orientation camp. Principal Malcolm Williams, who was fired after the incident, now has to be reinstated. File photo.
Image: Alaister Russel

A bargaining chamber for teachers has ordered the Gauteng education department to reinstate the principal of Parktown Boys' High School, Malcolm Williams, after he was fired in December last year following the death of a grade 8 pupil at a school camp.

Enock Mpianzi, 13, drowned in the Crocodile River on January 15 last year during an excursion to the Nyathi Bush and River Break in Brits, in the North West. He and some other boys were on a makeshift raft that overturned hours after they arrived at the camp.

On Tuesday the Education Labour Relations Council (ELRC) ordered the department to reinstate Williams from December 8 2020, the day he was dismissed.

He must report for duty on July 1.

The department was also ordered to pay Williams an amount of R285,594 — equivalent to six months of his salary — by July 30.

The Gauteng education department has reached an out-of-court settlement with the Mpianzi family with regards to the death of grade 8 pupil Enock ...
News
1 month ago

Williams argued that his dismissal on two counts of alleged misconduct was substantively and procedurally unfair.

The first allegation was that he unjustifiably prejudiced the administration, discipline or efficiency of the department by undertaking a school excursion without prior approval.

The second allegation was that he failed to ensure that a correct roll call for all the pupils who went on the camp was maintained.

The department issued Williams with a notice of dismissal relating to the death of Mpianzi in October.

Last month, the department reached an out-of-court settlement with the Mpianzi family regarding the pupil's death.

Though no amount was disclosed, the family last year lodged a civil claim of R20m against the school, the department, Nyathi Bush and River Break, the school governing body and the sacked principal.

* This is a developing story.