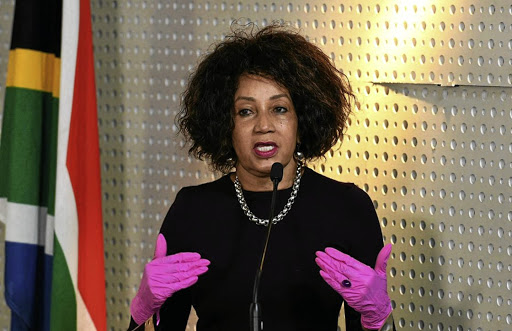 Minister of human settlements, water and sanitation Lindiwe Sisulu says the department has moved swiftly to act against officials flagged for irregularities by the auditor-general. File photo.
Image: Jairus Mmutle/GCIS

There has been progress in dealing with officials in the department of human settlements, water and sanitation who are implicated in irregularities.

That was the word from minister Lindiwe Sisulu, who on Thursday appeared before parliament’s portfolio committee on human settlements, water and sanitation.

Sisulu told the committee that with the help of an advisory committee she established in December 2020, the department was able to move swiftly to act against officials who were flagged for irregularities by the auditor-general (AG) in the previous year.

“The AG had previously said there is no consequence management in most departments, especially within our department. This had an effect in eroding the AG’s confidence in the department running its affairs efficiently,” said Sisulu.

The advisory committee, headed by Susan Shabangu, is mostly focused on disciplinary measures against officials flagged in reports by the AG and other forensic investigations.

“The problem we face is that these are very complex cases and in most instances they also involve external people [service providers],” she said.

A point of concern for most members was the lack of criminal prosecutions against officials.

A lot of money went missing. We are talking billions, but with the involvement of the SIU we believe that money will come back to the department.

Shabangu revealed 23 officials had been referred to the police for further investigation, of which nine had resigned from the department.

“The cases were reported to the police but we are not sure if they [police] take these matters seriously. There’s a lack of follow-up from police and we see no action from them.

“The minister [Sisulu] must take up this issue with the ministers of police and justice because we continue to refer matters but nothing happens. We continue to face this challenge over and over again. The minister also needs to raise this at cabinet level,” Shabangu said.

She said another problem they faced was officials who jumped from one department to another, despite the serious allegations they faced.

“Those officials are never dealt with,” she said.

EFF member Shirley Mokgotho asked the department how much it had paid the Special Investigating Unit (SIU) so far and how much it spent on Shabangu’s team because she felt this was a duplication of duties.

Sisulu could not immediately answer but undertook to send the information regarding spending on the SIU to the committee.

Thousands of Eastern Cape housing beneficiaries will have to wait longer for their homes, because the provincial human settlements department ...
News
1 week ago

Shabangu said they were trying to locate missing billions within the department. “A lot of money went missing. We are talking billions, but with the involvement of the SIU we believe that money will come back to the department,” she said.

Despite the shortcomings identified by the portfolio committee members, they applauded the department for its progress and said it seemed to be on the right track.