Food project mushrooms from 80 gardens to 680 in mere months 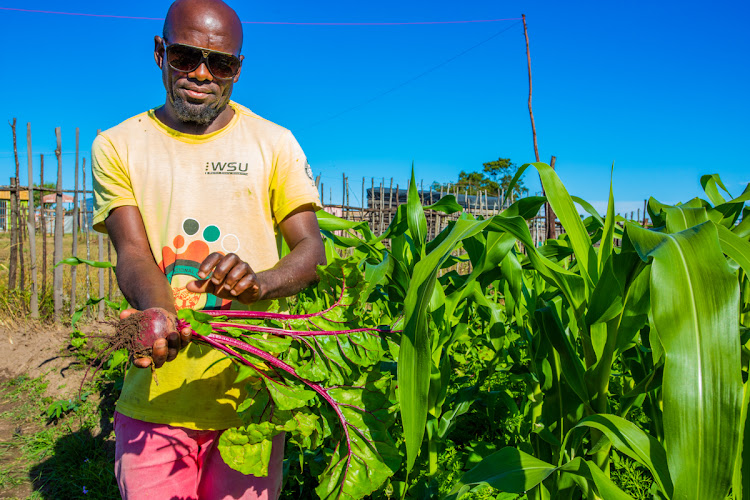 Thembalethu resident Asanda Toyise had such an abundant crop of winter vegetables that he could sell the excess to visitors to the local clinic.
Image: Supplied: Melanie Mare for George Municipality

Asanda Toyise and his abundant crop of spinach and beetroot are an inspiration for a food garden project that is flourishing in the southern Cape.

Toyise's garden has produced so much this winter, he could sell the excess to visitors at the local clinic.

George municipality’s food garden project has mushroomed from 80 to 680 gardens in a space of six months.

Municipal spokesperson Chantel Edwards-Klose said the story of  Thembalethu resident Toyise was among their most inspiring.

Edwards-Klose said the programme started off with 80 gardens in November 2020, which expanded to 105 gardens by the end of January, 265 by the end of the summer planting season and as of June had climbed to 680.

“We are excited about the project’s potential as a consistent food source and income generator and are deeply inspired by the communities’ sense of pride in bringing food to the table to their own homes and those of neighbours.

“It is the latter that has motivated the handing over of the project from the municipality’s economic development unit to our community development section so the food gardens can be integrated with other social projects such as municipal soup kitchens and crèches. Economic development will, however, continue to provide support to gardeners who may be able to extend their food production beyond subsistence,” said Edwards-Klose.

Youth-owned business is making a success of rose garden

Roses do not bloom quickly, they take time to blossom and grab attention with their beauty and natural perfume.
News
4 months ago

The project is run by co-ordinators who identify possible gardeners in communities and oversee the establishment of small vegetable gardens in their backyards.

The co-ordinators guide the process from soil preparation to harvest and visit regularly to mentor and check on their needs and progress.

The aim is that the gardens will become sustainable throughout the year according to the seasons and that gardeners will ultimately not only put food on the tables of their own families but also have extra to share, sell or barter with.

Edwards-Klose said communities across the municipal area had embraced the project as word of it spread.

IN THE GARDEN | Acid soil can give you some stunning blooms

Each garden is expected to yield a crop to feed five to 10 people, depending on a range of factors including garden size and growing conditions.

Edwards-Klose said the municipality welcomes involvement and support from business, NGOs and individuals who can assist in the long-term sustainability of the project.

“We believe the Food Gardens Project can become a life-changing beacon of hope,” said Edwards-Klose.