Police ministry spokesperson Lirandzu Themba said minister Bheki Cele would not be in Nkandla on Wednesday, the deadline by which police were meant to arrest former president Jacob Zuma if he had not handed himself over. 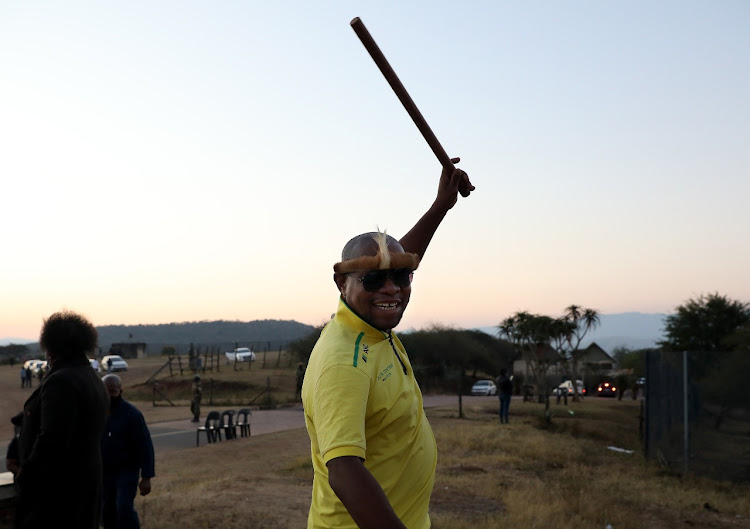 Edward Zuma pictured outside the family's Nkandla homestead on Wednesday evening. He told reporters: 'Give my father's cell to another prisoner because we will not allow his arrest'.
Image: Sandile Ndlovu

Former president Jacob Zuma's son Edward Zuma has told authorities to give his father's cell to someone else as the “Zuma clan” would not allow his arrest.

The 44-year-old Edward — who has been outspoken against authorities tasked by the Constitutional Court to arrest his 79-year-old father — once again stressed that there would be bloodshed should any attempt be made to take the former president into custody.

He was addressing media outside Zuma's Nkandla home in northern KwaZulu-Natal on Wednesday, the deadline by which the Constitutional  Court had ordered that police arrest the former president if he'd not handed himself over.

“As the local people, as Edward Zuma, we will be stopping anybody who will want to incarcerate Jacob Zuma. That particular cell that is reserved for him for tonight, they might as well give it to another prisoner because, as the Zuma clan, we are not going to allow that. They will have to shed blood for that because we are going to be defending him with our lives,” he said.

"Give my father's cell to another prisoner because we will not allow his arrest," says Edward Zuma, the son of former president #JacobZuma @TimesLIVE pic.twitter.com/duN1uihL4n

He reaffirmed that they would not allow his father to even agree to being arrested.

“We will not allow him to even agree to such a nonsensical decision that was taken by toxic people,” he said.

When asked how his father was feeling, Edward responded: “He is on top of the world.”

Police minister Bheki Cele was mandated by the Constitutional Court to ensure Zuma was taken into custody by midnight on Wednesday to begin serving his 15-month jail sentence for contempt of court.

In the wake of various legal challenges since his conviction and sentencing, Cele and police commissioner Gen Khehla Sitole earlier this week wrote to the Constitutional Court saying they would not take action to arrest Zuma until given clarity from the apex court to do so. By Wednesday evening there was no indication that such clarity had been provided or if police had received a response.

Police ministry spokesperson Lirandzu Themba said Cele would not be in Nkandla on Wednesday.

[MATTER OF FACT] Members of the media, please note the Minister of Police is NOT in #Nkandla today. Cc @SABCNews