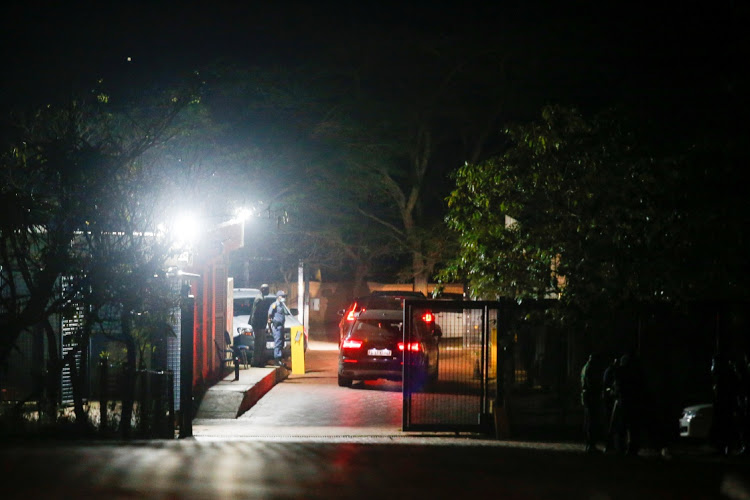 A convoy enters the homestead of former president Jacob Zuma in Nkandla as the former president handed himself over to police custody. The same convoy drove into the Estcourt prison.
Image: REUTERS/Rogan Ward

“As per all new admissions due to Covid-19, he is in isolation.”

Nxumalo said he had not checked on Zuma on Thursday morning, therefore he could not give details on how the former president was faring during his first few hours behind bars.

The correctional services department confirmed at 1.50am on Thursday that Zuma had “been admitted to start serving a 15-month sentence at [the] Estcourt Correctional Centre”.

“Mr Zuma will be taken through all the admission processes as per [department] regulations. Other relevant prescripts pertaining to admitting and orientating newly incarcerated persons will also be followed and executed,” said Nxumalo.

“Details about the appropriate classification, prerogatives and incarceration conditions can only be determined at the completion of the assessment process to be undertaken by relevant authorities within the employ of [the department].

“Keeping inmates in safe and secure custody remains cardinal to correctional services and we remain committed to this cause.”

The statement came about two hours after Zuma handed himself over to police.

The Constitutional Court last week sentenced the former president to 15 months in jail after it found him guilty of contempt of court. He had disobeyed the apex court’s judgment that he had to appear before the state capture inquiry.

Former president Jacob Zuma has officially been jailed. The correctional services department confirmed at 1.50am on Thursday that Zuma had “been ...
News
4 months ago