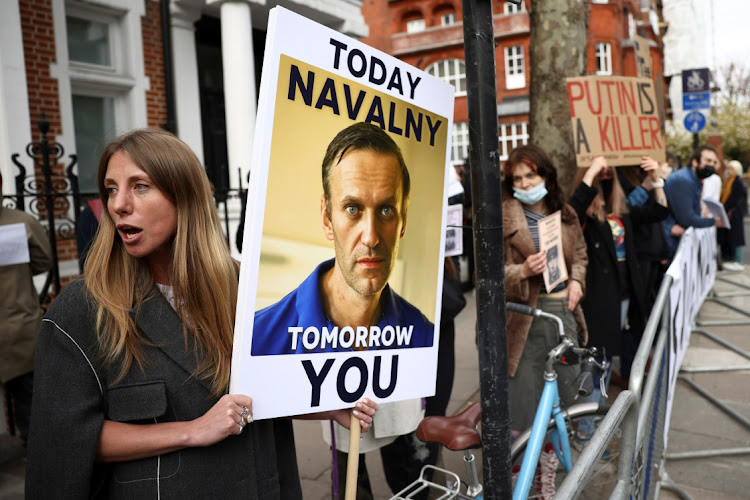 Navalny's allies have said the extremism ban was designed to crush them ahead of parliamentary elections this September.
Image: REUTERS/ HENRY NICHOLLS

Thirty-two percent of Russians support the extremism ban on jailed Kremlin critic Alexei Navalny's political network while 27% oppose it, according to an opinion poll by the Moscow-based Levada Centre published on Friday.

Levada, which polled 1,630 people on June 24-30, said 38% had voiced indifference over last month's ruling that designated Navalny's groups as "extremist". It also said that support for Navalny's activities had dipped to 14% from 20% last September.

Ivan Zhdanov, a close ally of Navalny, President Vladimir Putin's most outspoken critic, declined to comment on the figures, but said that anti-Navalny state "propaganda" had intensified and could be having an impact.

President Vladimir Putin told Russians on Wednesday that the time would come when he would name his possible successor in the Kremlin, but said the ...
News
6 months ago

Navalny's allies have said the extremism ban was designed to crush them ahead of parliamentary elections this September.

The ruling handed authorities the formal power to jail activists and freeze their bank accounts if they continue their activities. Navalny's allies suspended their groups before the ruling to make their supporters less exposed to persecution.

Navalny is in jail for parole violations over an embezzlement case he says was trumped up. He was arrested in Moscow this year after flying back from Germany where he had been recovering from a nerve agent poisoning in Russia.