Joburg metro police report 'continuous riots' in several parts of the city on Sunday morning, but police were not willing to immediately state whether these were linked to protests in support of jailed former president Jacob Zuma. 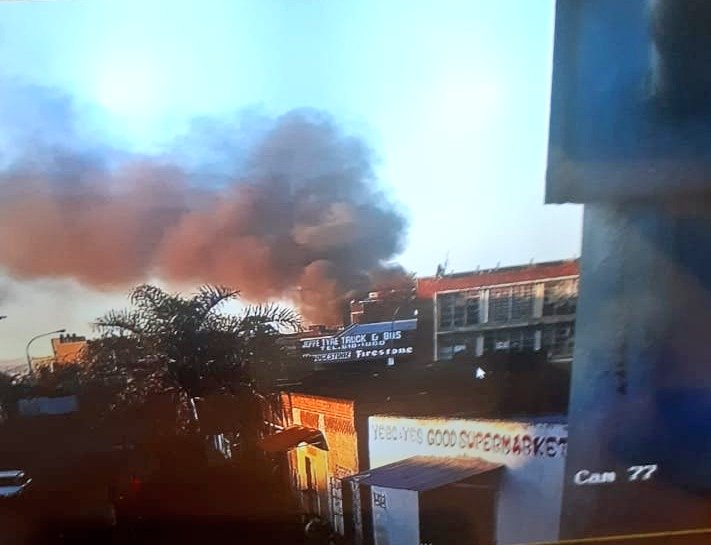 A building was on fire on Jules street in Jeppestown, Johannesburg, on Sunday morning, seemingly linked to ongoing protests in the area. The protests appear to be linked to those in KwaZulu-Natal in recent days in support of jailed former president Jacob Zuma, but police were not willing to immediately confirm this.
Image: Johannesburg Metro Police Department via Twitter

The freeway was closed in both directions in the region of the Denver extension, said Johannesburg Metro Police Department spokesperson Wayne Minnaar.

This after protesters burnt tyres and blockaded the road.

But there were further closures between Benrose and Cleveland due to “continuous riots in the area”, the JMPD said on its Twitter account. There were also “reports of shots being fired at passing vehicles”.

A building was on fire on Jules Street in Jeppestown, seemingly linked to the protests in the area.

M2 closed off to traffic in both directions btw Benrose & Cleveland following continuous riots in the area with reports of shots being fired at passing vehicles. Traffic is diverted at Maritzburg St & Cleveland Rd. #JHBTraffic#JoburgRoadSafety@CityofJoburgZA

Minnaar said that there were also “shops looted and vehicles torched” in the Maboneng and Alexandra areas overnight, but the number of damaged stores and vehicles had not been confirmed yet .

Asked if the protests were linked to those seen in KwaZulu-Natal in support of jailed former president Jacob Zuma, Minnaar said: “I cannot confirm that. All I can confirm is that there has been protest action.”

According to him, the protests started at about 10.30pm on Saturday and continued into Sunday morning. Police were monitoring and responding to the situation.

On Sunday morning SAPS said a statement on the latest developments was being prepared and would be released soon. This story will be updated when that statement is released.