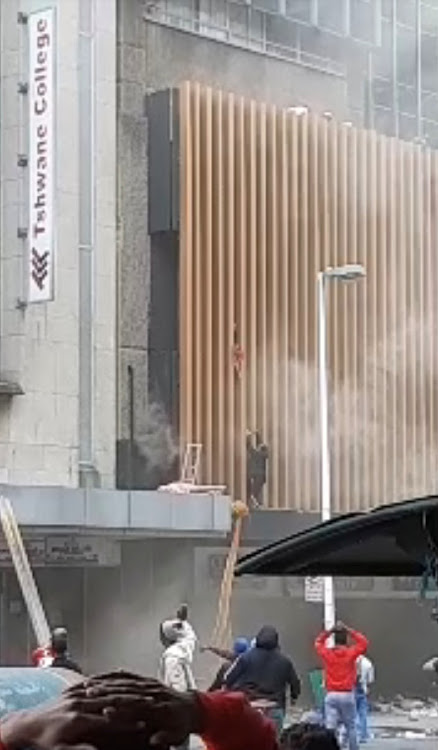 A baby is thrown from a burning building in Durban, amid spreading unrest following the jailing of former President Jacob Zuma, in this still image taken from video filmed on July 13, 2021.
Image: VIDEO OBTAINED BY REUTERS

A two-year-old girl survived unharmed after her mother threw her to safety as they escaped a burning high-rise building in Durban during protests.

The mother, 26-year-old Naledi Manyoni, told Reuters on Wednesday she had been on the 16th floor when the fire started on Tuesday. She ran down the stairs with her daughter.

Manyoni made her way to a ledge above the street and tossed the toddler to a group of people below as bystanders cried out in consternation.

After throwing her, I held my head in shock, but they caught her

“After throwing her, I held my head in shock, but they caught her,” Manyoni recalled outside the building as her daughter sat on her shoulders. “She kept saying, 'Mama you threw me down there.' She was scared.

“What was important was for my daughter to be out of that situation ... I couldn't escape alone and leave her behind,” she said as the girl, dressed in a red coat and hood, babbled and clapped her hands.

They stood on the street before burnt and ransacked shops. South Africa is in the throes of one of the worst upheavals in the post-apartheid era, which began when former president Jacob Zuma was jailed last week for failing to appear before the Zondo commission.

The protests, which started in KwaZulu-Natal on Friday, soon turned into mass looting, arson and riots in KZN and Johannesburg.