POLL | Do you think citizens did more than security forces to protect SA during the unrest? 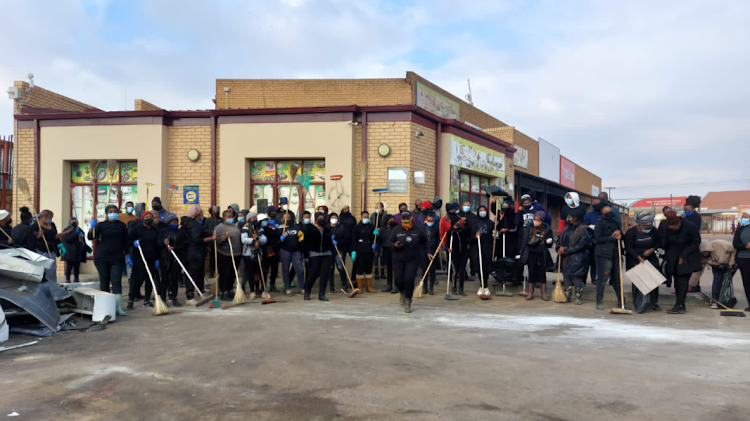 Business owner Thabo Tsotetsi and community members in Ebony Park came together to clean up a shopping centre damaged by looters.
Image: Supplied

Over the past few days, parts of Gauteng and KwaZulu-Natal have seen citizens taking to the streets to “protect” the country from unrest, destruction and looting.

Several communities in both provinces, with the help of local taxi association members and the police, have stood up against further looting and damage to shopping malls and businesses.

Some residents went on door-to-door operations to recover items looted by community members from nearby shopping malls. Others offered their time and resources to help clean damaged businesses and the streets.

Last week, acting minister in the presidency Khumbudzo Ntshavheni warned against community members taking matters into their hands and infringing on the rights of others.

“We do not want a situation where members of the public are at loggerheads with the law after their attempts to protect their communities, properties and their lives. We are pleading with communities to not infringe on the rights of others and not to take the law into your own hands,” she said.

To date, 3,407 suspects have been arrested on different charges after a week of looting and violence, with only one suspect granted bail and 1,122 expected to appear in court in KZN and Gauteng.

Three alleged instigators of the violent unrest were arrest on Thursday and Friday.

Retired magistrates and prosecutors roped in to expedite unrest cases

Two are expected to appear in courts in Randfontein and Westonaria on Monday on allegations of creating and circulating inflammatory messages with the potential to incite violence.

A third suspect is expected to appear before the Nigel magistrate’s court on Tuesday on similar charges.

At the height of the looting, President Cyril Ramaphosa authorised the deployment of the military to help the understaffed police service.

He said the violence had its roots in the pronouncements and activities of individuals with a political purpose, and expressions of frustration and anger.

“At the beginning of this unrest, there may have been some people who sought to agitate for violence and disorder along ethnic lines. We know the majority of our people have out of principle refused to be mobilised along these lines,” said Ramaphosa.