Crematoriums, funeral parlours and cemeteries were forced to close, leaving the families of those who died during the unrest to live with their bodies. 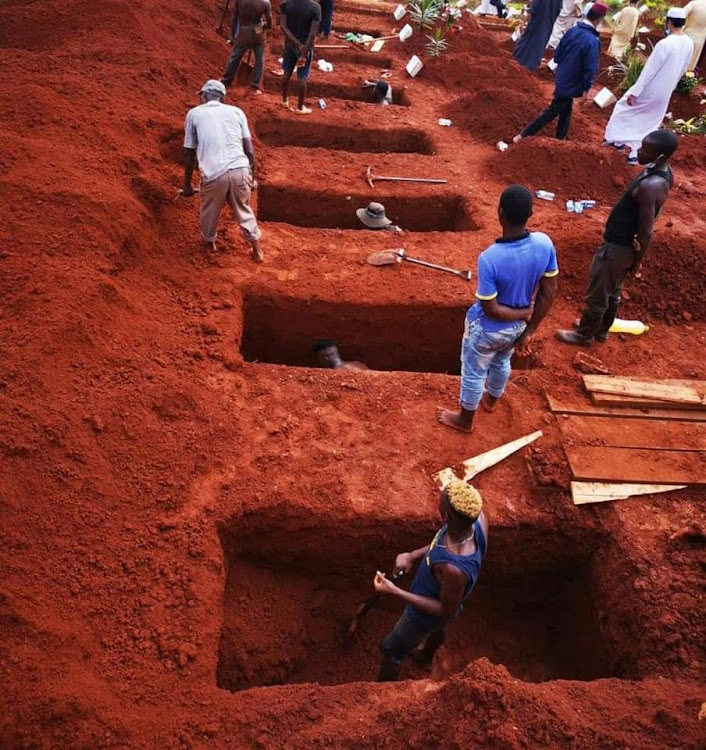 The families who lost loved ones during the week of unrest, riots and looting in KwaZulu-Natal and parts of Gauteng had to endure many hardships, including living for up to four days with corpses.
Image: FILE/ VIA FACEBOOK

The families who lost loved ones during the week of unrest, riots and looting in KwaZulu-Natal and parts of Gauteng had to endure many hardships, including living for up to four days with corpses.

This is because government offices, including home affairs, mortuaries, cemeteries, crematoriums and funeral parlours were forced to close their doors during this period. Some of the funeral parlours had their offices vandalised, looted or burnt. Others had their vehicles set alight or hijacked by looters.

All of this resulted in a huge backlog in the funeral and undertaking sectors. Thegraj Kassie, secretary of the Clare Estate Umgeni Hindu Crematorium that is across the road from the Clare Estate shack settlement, said it was decided to close the mortuary on Saturday July 10 after the roads leading to it were blocked with burning tyres, logs, concrete blocks and other debris.

We couldn’t operate because even our staff couldn’t get here to perform their duties. Mortuaries had to keep the bodies in the [few] cold rooms they had

“We couldn’t operate because even our staff couldn’t get here to perform their duties. Mortuaries had to keep the bodies in the [few] cold rooms they had. They complained that these rooms were filling up because the Covid-19 deaths are on the increase,” he said.

Kassie said the crematorium reopened only on Friday July 16 when the roads had been cleared and it was safer to operate. “Before the forced closure, we were doing between 10 and 12 cremations a day. But now, because of the backlog, we are doing between 20 and 25 cremations, and five or six of these are the cremations of people who succumbed to Covid-19,” he said.

Goodman Ncanda, one of the directors of Ncanda Funeral Home in Durban, said at least 17 premises were vandalised, looted and burnt. “We had to stop burying people and collecting bodies from all the affected areas because our vehicles were stoned and destroyed. Our customers were calling us to come and collect corpses, but we simply told them we cannot because we feared for our staff and we feared that we would lose more vehicles. I know some families who had to stay with bodies for up to four days because neither we nor the government mortuaries could get to the hotspots to collect the bodies. It was very sad.

Funeral parlours in Gauteng plan to "shut down" the home affairs head office in Pretoria on Tuesday over complaints that requirements for the removal ...
News
1 year ago

“We are still assessing the damage to our premises and resources. Our offices happened to be in the centres which were the most affected. Our offices were burnt and hundreds of our coffins and other equipment were stolen,” he said.

Even when the home affairs offices were open and operational on Monday July 19, the backlog could not be cleared immediately because of the observation of Covid-19 regulations in the offices, added Ncanda.

Looters laid waste to some of the vital organs and centres of society. Philani Valley Mall had a dialysis centre that helped local people with kidney disease. When the mall was ransacked and looted, the dialysis centre was not spared. Looters took patients’ medication and medical files as well as equipment, including the oxygen cylinder necessary for dialysis, according to senior member of staff Mluleki Simelane.

“This centre helped many people, including elderly men and women who came here for daily dialysis instead of going to hospitals in town or suburbs. Now all of that is gone,” Simelane said.

In a week of winding queues for food in protest-ravaged areas of KwaZulu-Natal, doctors and nurses were forced to make important decisions: join the ...
News
11 months ago

One of the centre’s regular patients was Vincent Shezi, a 58-year-old Umlazi township resident. He died on Tuesday July 13 shortly after being admitted to the Kingsway hospital in Amanzimtoti. His wife, Nelisiwe Mkhize, said he would not have died if the riots and looting did not take place. She said her husband had been on a daily dialysis routine since he was diagnosed with kidney disease in 2015.

“On Monday my husband was due for another session, but the Elangeni Dialysis Centre [in Umlazi township] was vandalised and all its equipment and medication taken by the looters. So he couldn’t go there and during the course of the day he started struggling to breathe.

“We all knew that he had to dialyse regularly or his life could be in danger. On Monday we couldn’t get him to hospital because of violence and rupture throughout the township. When we managed to get the car to take him to Kingsway hospital he was still battling to breathe. A short while after he was admitted doctors informed us that he’d died,” she said.

A family feud is brewing over the estate of Butterworth multimillionaire businessman Mqokeleli Kepe, owner of Chithibhunga Funerals, who died of ...
News
11 months ago

This was not the end of the misery for the family. She said her husband couldn’t be buried for a number of days because government offices, cemeteries and even funeral parlours were closed owing to the unrest.

“We couldn’t even make funeral arrangements because we couldn’t get money as banks were closed. We couldn’t even get supplies in the shops as they were vandalised and looted,” she said, adding that her husband was eventually laid to rest in his homestead at Umbumbulu on Wednesday July 21.

“The people [looters] started this as a game, but to some of us it has resulted in us losing so much — losing our husbands, our fathers, our breadwinners. But there is nothing we can say because it was God’s will,” she said.

A large police and army presence was on high alert outside the Verulam magistrate's court on Monday, where seven people arrested in Phoenix on Friday ...
News
11 months ago

There are many other families who couldn’t bury their loved ones because of the shutdown. By midday on Thursday July 22, three funerals were taking place in the Luganda Cemetery in Mariannhill, about 31km west of Durban.

One of these funerals was that of Thembeka Mlambo, a 27-year-old woman from the Ekuphumuleni RDP housing settlement near Pinetown, who died after being assaulted by her live-in boyfriend. Her relatives said she leaves behind two children, one five years old and the younger only nine months old.

Xolani Nzimase, Mlambo’s cousin, said: “As the family, we were told that she had gone with friends to loot. When she came back her boyfriend allegedly assaulted her, hitting her on the head with a sharp object. We are told she fled and went to her friend. It’s either that they couldn’t take her to hospital because of the riots and mayhem, or they underplayed the extent of her injuries. On Thursday morning when they woke up, she was cold and dead.”

He added that a case of murder has been opened at the police station but her boyfriend has disappeared.

Gauteng is not likely to see a jump in Covid-19 cases and deaths after the recent looting and civil unrest, says Prof Shabir Madhi.
News
11 months ago

KwaZulu-Natal MEC for health Nomagugu Simelane said on Wednesday July 21 that normality had returned at all government facilities, including home affairs offices, mortuaries and cemeteries, after more than a week of forced closure.

“We are quite satisfied with the gradual return to normal working conditions at health facilities throughout the province. We are still calculating the real costs of the damage, but we are pleased that most staff have returned to work. Yes, the queues are a bit longer than usual, but they will become shorter as more people get seen.

“The supply of auxiliary services such as food, oxygen and fuel continues to run smoothly, and our emergency medical services are up and running. So are our forensic pathology services.”

Simelane urged residents to protect health and other public facilities from vandalism, looting and torching.

"Couldn’t they just leave that food for the kids? This is so sad," said Zenande.
Lifestyle
11 months ago

The National Funeral Practitioners Association said on Thursday that its members’ parlours have been inundated with demands for burials. The association said the burial of many of the 337 people who died during the violence in KwaZulu-Natal and Gauteng may have to be postponed because of limited space in mortuaries and shortages of burial sites as gravediggers did not work during the unrest.

The association’s president, Mzi Hlengwa, said the situation was compounded by the fact that some of the bodies had not yet been identified.

“Today we woke up to 128 more bodies, of which 35 are still unidentified. The increase in the bodies comes from the riots. There’s also been a lot of shooting and killing.”