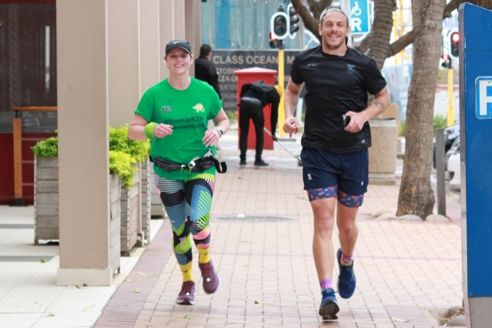 A Johannesburg businessman, who is attempting to break the Guinness World Record for the most consecutive half marathons completed in a row, passed through Umhlanga, north of Durban, at the weekend.

Having started in Manguzi, just south of the SA-Mozambique border, on July 8, he will circumnavigate the SA coastline.

On Saturday, Chantelle Booysen, a project manager at the South African Depression and Anxiety Group (Sadag) Durban office, put on her running shoes and joined him.

Throughout this adventure, Cock has to be accompanied by a “witness”, as per the stipulation from Guinness World Records.

“As a mental health activist and a social runner, I am very inspired by Henry's commitment to mobilise people's support in such a big way. The effects of the Covid-19 pandemic have accentuated already unresolved mental health challenges,” said Booysen.

Karnazes is widely credited with helping fuel the rise of ultra-distance running through his million-selling 2006 book "Ultramarathon Man".
Sport
3 months ago

Booysen, who is also a youth advocate for the Lancet Commission for global mental health and a law graduate, said she was running to remind people to treat others with empathy and to promote “hope as a muscle that we all can train to be better at”.

“These are my core ingredients in navigating difficult times. I'm also running to get people to donate to this cause.”

Cock said the origins of his feat started with “a few drinks one evening, which went from a bit of banter and an email to Guinness World Records, to the challenge being approved and becoming a reality”.

Cock, who wasn’t a runner or a professional athlete, had to undertake early morning training runs and said his bedtime went from 11pm to 8pm.

His life was also affected by the Covid-19 pandemic. He lost more than 15kg after a long-term relationship ended, while having to deal with his business being drastically affected, putting pressure on his employees and their families.

This stress and exhaustion led him to seek professional medical assistance, something that is not accessible to the majority of the population, due to the lack of posts for psychologists and psychiatrists in the public sector.

There will be a number of landmark runs along Henry’s journey, such as his 50th half-marathon in Qonce (King William's Town), his 100th in Cape Town and then the record-breaking run in Melkbosstrand.

He will also participate in the Cape Town Marathon on October 17, a week after World Mental Health Day.

Cock's aim is to raise more than R6m in support of Sadag.

Suntosh Pillay, who works as a clinical psychologist in the public sector, said running had always been a major focus of efforts to improve mental health awareness in the province.

“Our annual KZN mental health walk on the Durban beachfront last attracted more than 950 people, for us it’s vital that people see the link between a healthy body and a positive mind,” he said.

The Sadag KZN office, an initiative of Prof Suvira Ramlall and Pillay, is only the provincial branch of the national organisation and began after the success of the KZN Mental Health Advocacy Group the duo launched in 2015.

“The civil unrest last week in KZN has left us with a traumatised population, full of paranoia, anxiety, and uncertainty. Now, more than ever, we need to find innovative ways to boost our resilience and mental health,” added Pillay.

“We draw inspiration from Henry's endurance and generosity, and I hope that people make a pledge to donate, so that his run is more than just a record-breaker, it also helps sustain important community projects in Durban and KZN more broadly.”