Police handicapped by laws that prevent them from shooting looters, says Khehla Sitole 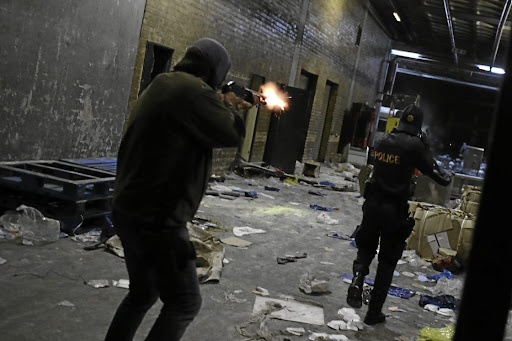 That police were overwhelmed as they faced waves of unrest raises questions about the public order policing policy.
Image: Alaister Russell

The rules forbidding police from opening fire on looters requires attention if scenes of police apparently standing helplessly by as mobs ransacked and burnt buildings and trucks were to be avoided in future.

This startling claim was made by national police commissioner Gen Khehla Sitole during a briefing by SAPS officials to parliament's police portfolio committee meeting on Thursday.

“The current laws and human rights prescriptions, including public perceptions, are heavy on the police and handicapping them from acting,” Sitole said.

Sitole was responding to a question by portfolio committee member Rev Kenneth Meshoe about police safety.

“During the riots and looting, we saw some police withdrawing from the mobs that were charging and when we asked them why they were withdrawing, they said they were not allowed to shoot at the protesters, even those who were armed,” said Meshoe.

The problem is you can’t shoot them, cop says about looter stealing goods

There were chaotic scenes at the Springfield Value Centre in Durban on Monday as scores of people from surrounding communities stormed the shopping ...
News
11 months ago

SAPS members also allegedly said it was “difficult for them to be hard” because they use public transport and rioters were saying, “We will get you on the bus ... and we know where you stay,” Meshoe added.

“Under such conditions how can police be effective in their duties?” Meshoe asked. “They are not even allowed to shoot when they are shot at.”

While police would be trained and equipped to handle unrest situations “without maximum use of force”, the laws also needed to be addressed, said Khehla.

“They create trauma,” he said.

Police minister Bheki Cele said the issue was “a difficult matter, starting with Marikana”. He was making reference to the Marikana massacre in August 2012, when police were responsible for the deaths of 34 miners.

The police were faced with a dilemma on how to respond in these situations, Cele said.

The 26-year-old Mercedes-Benz driver who went viral on social media after being captured on film allegedly looting a popular Durban Woolworths and ...
News
11 months ago

While police members who used their firearms when on duty were “heavily investigated”, they felt that the reasons for doing so were often not fully taken into account.

“We have seen police taken by criminals and put in the back of the van,” he said, referring to the incident in which the charred remains of two Mareetsane police officers were found in their burnt-out vehicle in North West on Monday night.

The two policemen had stopped a vehicle loaded with suspected stolen goats and radioed their commander that they were bringing the suspects to Mareetsane police station, according to reports.

Their bodies were discovered the following morning.

“Police are highly regulated and restricted at the expense ... of their own lives,” Cele said.

Taking a veiled swipe at the Farlam Commission into the Marikana massacre, which found that the use of maximum force in public order policing needed to be reviewed, Cele said police “stand alone ... when they try to defend themselves”.