WATCH | ‘I got my jab’ — Mbalula gets vaccinated 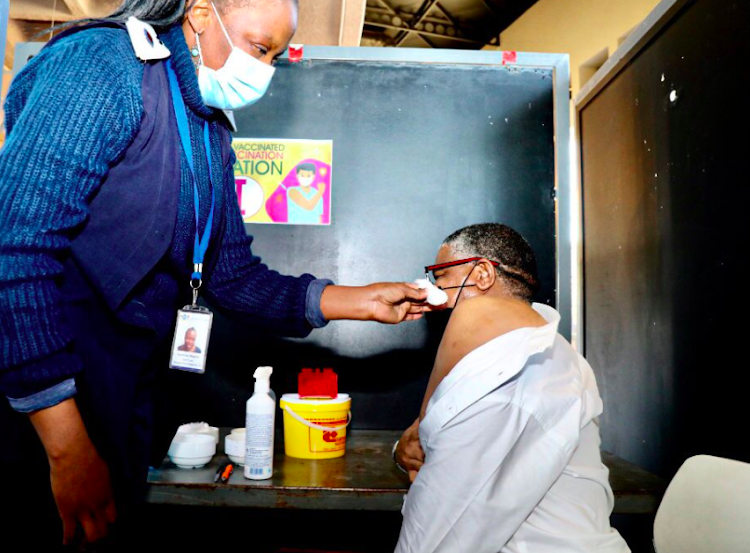 Several months after being at the centre of a massive debate on social media after many thought he had got the Covid-19 vaccine early, Fikile Mbalula finally got the jab.

The transport minister on Wednesday shared a video of himself getting the Johnson & Johnson vaccine.

Mbalula was among traffic officers who got their vaccines under the rollout for law enforcement officials.

This forms part of the government's efforts to vaccinate the general population and front-line workers in the security cluster.

“The vaccination numbers are encouraging and I will also form part of this traffic law enforcement cohort. It’s pleasing and some sort of relief to know that law enforcement is protected,” Mbalula said.

In a video of him getting his jab, Mbalula can be seen joking with the crowd, saying he was “super” when asked how he was feeling.

“I got my jab, a J&J vaccination,” he captioned the video.

Thank you Department of Health pic.twitter.com/tE6P98HjUt

The vaccination numbers are encouraging and I will also form part of this traffic law enforcement cohort.

It’s pleasing and some sort of relief to know that law enforcement is protected. https://t.co/vqroOW6D0H pic.twitter.com/jGRnUzoNdO

Last month, Mbalula said he would get his jab when the second phase of the Covid-19 vaccine rollout was expanded to taxi drivers.

He said taxi drivers would be vaccinated after teachers and that he and SA National Taxi Council president Phillip Taaibosch would be among them as this was their “constituency”.

“We have lost taxi drivers, ordinary people, businessmen and the poorest of the poor. We are burying people every weekend due to Covid-19,” he said at the time.

To date, SA has administered over 7-million vaccine doses of which 194,891 were distributed on Wednesday.

US to ship 5.66-million Pfizer vaccine doses to SA, Nigeria to get Moderna

The US government on Wednesday will ship nearly 10-million doses of Covid-19 vaccines to Nigeria and SA as the continent battles a third wave of ...
News
1 year ago

Mbalula had tongues wagging in February when he posted a snap of him cringing while getting an injection, along with the caption “vaccine”.

The minister was criticised by some, who claimed he had been given preferential treatment to get the Covid-19 vaccine early.

Speaking to TimesLIVE, Mbalula said the picture was “old” and he was trying to encourage people to have the Covid-19 vaccination when it became available.