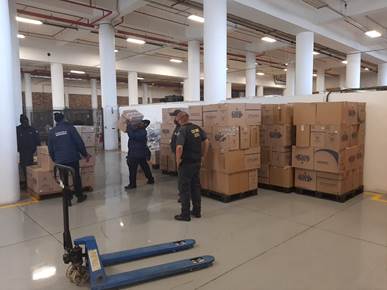 Counterfeit cigarettes valued at R6m have been seized by SA Revenue Service officials in a raid on numerous traders in Cape Town.

Members of the customs national rapid response team and the police carried out the intelligence-driven operation on Thursday, seizing 443 cases each containing 50 cartons of various brands of cigarettes.

The operation was part of a heightened focus on illicit trade in cigarettes and tobacco products. Sars commissioner Edward Kieswetter said the import of illicit cigarettes and other goods such as clothing, counterfeit medicines and used cars were destroying local industry and contributing to job losses.

Kieswetter said there were also health risks for consumers as illegally imported cigarettes do not comply with SA health regulations.

“Sars has a mandate to facilitate legitimate trade and will not tolerate illicit trade that harms our economy and our people,” said Kieswetter.

“It is our strategic objective to make it hard and costly for those who do not comply with our tax and customs and excise legislation.”

East London was to be the warehouse of a R10m haul of illegal tobacco. But a bust at the Beitbridge SA-Zimbabwe border post on Wednesday put an ...
News
6 months ago