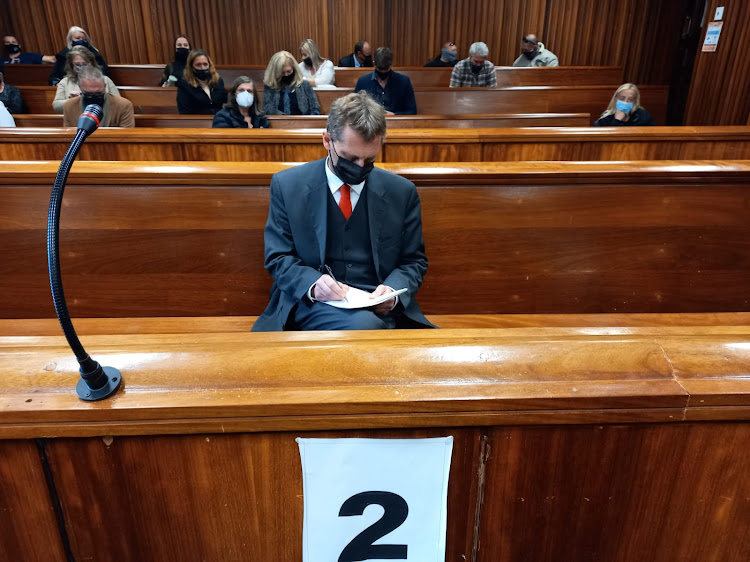 Two German nationals, Jens Leunberg and Kristina Adler, were on Friday sentenced to 25 and 10 years' imprisonment respectively for fraud and the murder of fellow German national Claus Schroeder.

In March this year, Judge Thembekile Malusi of the high court in Port Elizabeth found the couple guilty of the crimes.

Adler was absent from court after she was admitted to hospital due to the deterioration of her mental state.

Malusi said that there were substantial and compelling circumstances in this case for the court to depart from the minimum sentence provisions.

Convicted murderer and fraudster Kristina Adler broke down as sentencing proceedings were about to begin in the high court in Gqeberha on ...
News
1 year ago

Factors which were considered in Adler’s case were her ill health, the welfare of her two young children, who were separated from their parents at the ages of three and five years, and the extended period she had been awaiting trial.

Leunberg, 42, on the other hand, had been in custody for 10 years awaiting trial.

Leunberg and Adler, 44, who have two children together, first visited SA in May 2007 for a holiday.

They met a married couple, Claus and Tanja Schroeder, in Jeffreys Bay in 2007.

Adler and Leunberg then indicated to the Schroeders that they were interested in purchasing their farm in the Jeffreys Bay area.

The couple approached Schroeder with false bank statements to buy his farm in Owvanuk, near Thornhill.

An agreement was drawn up to sell the property for an amount of R8.5m in 2008.

Sentencing proceedings in the marathon trial of convicted murderers Jens Leunberg and Kristina Adler hit one snag after another on Wednesday as ...
News
1 year ago

On August 14 2009, Schroeder arrived at Owvanuk farm as he was concerned that more than a year had passed since the sale agreement was signed between the couples yet the R8.5m had not been transferred.

Leunberg then, under the false pretence that his vehicle had been stuck in the kloof, lured Schroeder to the kloof where he killed him.

However, witnesses stated that they saw Leunberg emerge from the bushes with blood on his clothes.

The deputy director of public prosecutions in the Eastern Cape, Indra Goberdan, welcomed the sentence.

“The sentence was fair, given the fact that Jens Leunberg spent 10 years in custody awaiting trial. The sentence sends a strong message to criminals,” she said.