The Constitutional Court's apparent refusal to release Jacob Zuma pending its decision on whether to rescind its imprisonment order is an “egregious violation” of international law, the former president's lawyers said in court papers on Friday.

They were responding to the court's request for submissions on the implications of international law on Zuma’s detention.

The court is considering whether to rescind its order that he be imprisoned for contempt of court after he defied its order to attend the state capture commission.

Zuma was taken into custody on July 8 to begin a 15-month sentence. The court heard arguments on July 12 and reserved judgment.

But on August 6 it asked all the parties to the case for legal arguments on whether it is “obliged to consider” the UN International Covenant on Civil and Political Rights when looking at the fair trial rights under the SA constitution; as well as the right not to be detained without trial.

Section 39(1) of the constitution says that when interpreting the bill of rights, courts “must consider international law”.

In its directions, the ConCourt specifically asked about articles 9 and 14(5) of the covenant and “decisions of the human rights committee”.

Article 9 sets out a number of rights of accused and arrested people and article 14(5) says that “everyone convicted of a crime shall have the right to his conviction and sentence being reviewed by a higher tribunal according to law”. 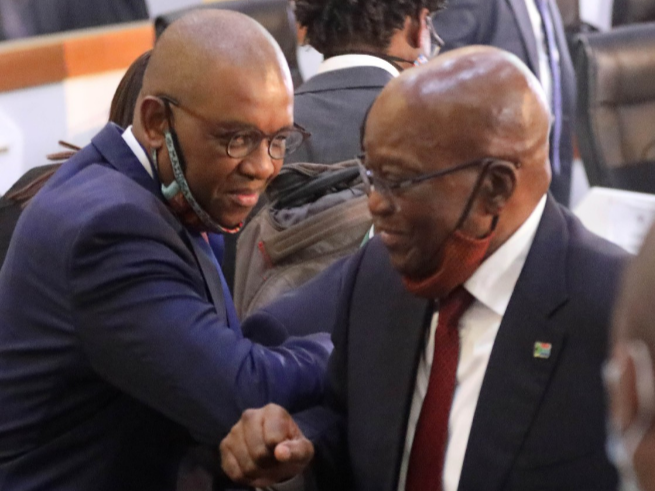 In submissions filed on Friday, Zuma’s counsel Dali Mpofu said the ConCourt was bound by the provisions of covenant, which was ratified by SA in 1998, and it was mandatory that the court consider it.

One of the covenant’s provisions was that an imprisoned person is entitled to challenge his imprisonment in court and that this must be considered without delay, said Mpofu.

He said that when Zuma had applied for rescission of the contempt and imprisonment order, he specifically asked for an interim order that he be released in the meantime — and the principles of the covenant were applicable to that request.

Zuma has been in custody for over a month and will be eligible for parole towards the end of October. Submissions from the commission and other friends of the court are due next week.

Mpofu also argued that, by issuing directions, the court had made it clear that “the obligatory duty to consider the ICCPR was not carried out” when it held Zuma in contempt and sent him to prison.

“Apart from anything else, the failure to have done so constitutes a rescindable error and/or omission. The application ought accordingly to succeed on this ground alone,” said Mpofu.

Bring him back alive and in one piece.Those were the words that former president Jacob Zuma's first wife, Sizakele MaKhumalo Zuma, ordered police on ...
News
10 months ago

Friend of the court Democracy In Action (DIA) also made submissions on Friday, saying that by deviating from its normal procedure when sending Zuma to prison, the ConCourt breached the covenant.

DIA’s counsel, Vuyani Ngalwana, referred to article 9.1 of the covenant, which says “no-one shall be deprived of his liberty except on such grounds and in accordance with such procedure as are established by law”.

Ngalwana argued that the ConCourt’s main judgment “expressly took leave of such procedures as are established by law”.

He quoted from the majority judgment where it dealt with why the court had decided to grant direct access to the highest court. The judgment said: “The matter is self-evidently extraordinary. It is thus in the interests of justice to depart from ordinary procedures.”

Ngalwana said that even if Zuma had shown “extraordinary” disdain for the apex court, as the majority said, this could not “validly and reasonably justify this court giving short shrift” to his fair trial rights.

“We urge this court to embrace customary international law, even if it does not like the outcome to which such embrace may result,” he said.