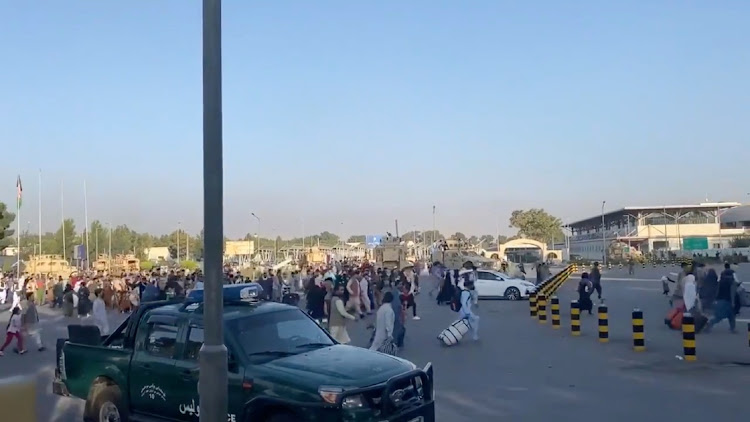 A horde of people run towards the Kabul Airport Terminal, after Taliban insurgents took control of the presidential palace in Kabul, on August 16, 2021
Image: JAWAD SUKHANYAR

One witness said he had seen the bodies of five people being taken to a vehicle. Another witness said it was not clear whether the victims were killed by gunshots or in a stampede.

US troops, who are in charge of the airport, earlier fired in the air to scatter the crowd, a US official said.

Officials were not immediately available to comment on the deaths.

Meanwhile, Britain's defence minister on Monday acknowledged that the Taliban are in control of Afghanistan and British and Nato forces will not be returning to fight the insurgents.

“I acknowledge that the Taliban are in control of the country,” defence secretary Ben Wallace told Sky News. “I mean, you don't have to be a political scientist to spot that's where we're at.”

Asked if Britain and Nato would return to Afghanistan, Wallace said: “That's not on the cards ... we're not going to go back”

Wallace said the military side of Kabul airport was secure and that Britain was doing everything it could to evacuate British citizens and Afghans with links to Britain.