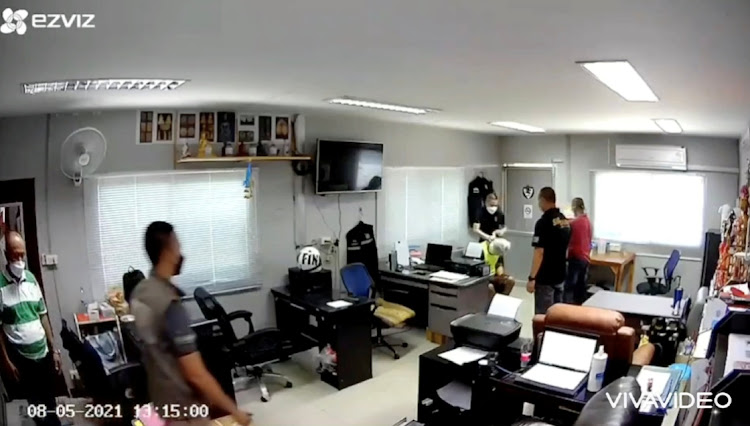 A police officer holds a plastic bag over another man's head, in Nakhon Sawan, Thailand, August 5, 2021, in this still image obtained from a social media video.
Image: Youtube/Sittra Lawyer/via REUTERS

Thai authorities have launched a manhunt for two police officers suspected of being involved in torturing to death a man who had been arrested for drug offences, police said on Thursday, after a video of the incident was shared widely online.

The video posted by lawyer Sittra Biabungkerd on his Facebook page showed what appeared to be a man being suffocated by a plastic bag placed over his head while he was pinned down by four men.

Five police officers from Nakhon Sawan province have been detained, while a “round the clock” hunt was on for two others, deputy police spokesperson Kissana Phathanacharoen said in a statement.

Arrest warrants issued for the suspects include the charge of murder by torture.

Sittra, who runs a legal aid foundation, said he received the video clip from a lower ranking officer who asked him to pass it to the national police chief, claiming it showed “superintendent Joe” of Nakhon Sawan police station trying to extort money from a drug dealer.

Children brought to SA without dad's consent must return to Thailand: court

The Supreme Court of Appeal has ruled against a woman who unilaterally removed three children from Thailand and brought them to SA in December 2019.
News
5 months ago

An official police order identified “superintendent Joe” as Police Colonel Thitisan Uttanapol. Police raided his home in an upmarket residential estate in Bangkok on Wednesday and found 13 cars, including a Lamborghini and Ferrari, according to media who accompanied police on the raid.

“There are still good cops, bad people that do bad things will face consequences,” he said, adding that Prime Minister Prayuth Chan-ocha had personally instructed police to make improvements to restore public confidence in the force.

Thailand's police are widely seen as one of the country's most corrupt institutions, analyst said, and Prayuth's government had pledged reforms. “The case will be a real test for the Thai justice system that has faced questions by some about its ability to hold officials like the police accountable,” said Thitipol Phakdeewanich, the dean of Ubon Ratchathani University' political science faculty.