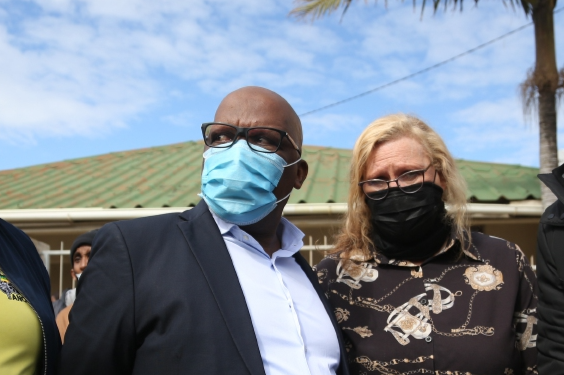 Mayor Xola Pakati, ventre, with Deputy Mayor Helen Neale-May in front of the house in Quigney where Nosicelo Mtebeni was brutally murdered, to call for action against gender based violence
Image: MARK ANDREWS

Rapists and murderers have no place in the metro and it is high time serious discussions were held around changing toxic masculinity, Buffalo City mayor Xola Pakati said.

“Shame on you rapists, shame on you murderers,” he said while talking about gender-based violence recently.

“I have observed a rapid rise of gender-based violence cases in our city. I am shamed by the men who continue to abuse the women of our land to the point of brutally killing them.”

He referenced the horrors women have to endure at the hands of men, day after day, week after week.

“About a week ago, young Nosicelo Mtebeni was killed and butchered allegedly by her boyfriend in such a barbaric manner. It is high time that we work together as stakeholders to end gender-based violence and femicide.

“In March, a husband used a spade to butcher a woman in front of her kids in Ncera Village. The perpetrator of this gruesome act handed himself over to the police and social workers provided intervention for the family.

Nosicelo Mtebeni had been excited to become the first graduate of her family. Her parents, father Kolisile and mother Ntombizandile had pinned ...
News
3 months ago

“Just a few months ago, a woman was murdered and burnt beyond recognition in Tyusha Village, Qonce. This was supposedly done by two brothers because of a dispute over the sale of a cow.

“While the case is not finalised, the gruesomeness of the murder is in no doubt. That woman was the aunt of the men accused of the crime.”

Children, he said, were not spared these horrors.

“Just before the end of last year, six-year-old Inathi Mhlahlo was raped and murdered while on her way to buy sweets and crisps from a local shop in Mdantsane.

“The barbarity and brutality of this incident are unimaginable.”

One of  former president Nelson Mandela’s eternally inspiring remarks is that: “Freedom cannot be achieved unless the women have been emancipated ...
News
3 months ago

In another terrifying attack in Buffalo City last year, a man allegedly poured boiling water over his girlfriend and her one-year-old child. She was taken to a place of safety in East London.

The woman is now being sheltered by the Masimanyane Women’s Centre in East London.

Pakati has made a point of visiting victims of gender-based violence, described as a crisis by activists as well as President Cyril Ramaphosa.

“Our communities constantly mourn acts of barbarity by men who are ideally supposed to be the main protectors of women.

“This is a sad state of affairs and it is time for all of us to unite to fight the scourge.

“We must all make it known that there is no place for physical and systemic violence against women in our metro and our nation.”

He urged men to be protectors of women and children in their communities.

“There should be a thoroughgoing programme of changing the attitude of men about women, more particularly the practice and inculcation of toxic masculinity.”