Dr Joe Phaahla, minister of health, said the certificates will be fraud-proof 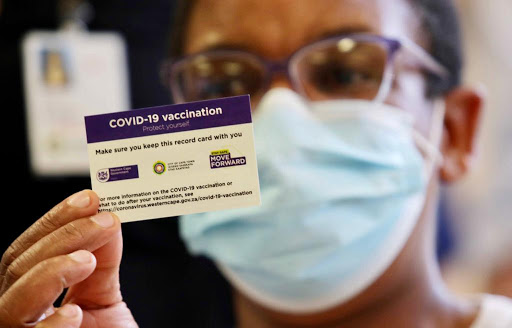 A week from now, all vaccinated South Africans will be eligible for a digital vaccination certificate, which the department of health says is “now under development”.

On Friday morning, health minister Dr Joe Phaahla said, “We have commenced with the development of the digital vaccination certificate which will be protected from fraud.”

He said the new certificates will be uploadable on a smartphone and will be printable too.

“This is in line with the World Health Organisation’s initiative to attempt to standardise vaccination proof all over the world,” he said, “and in a matter of a week this should be available to those who are vaccinated in South Africa.”

Once the certificate is available it will be so for “anyone who has been fully vaccinated, as long as their details appear in the EVDS [Electronic Vaccination Data System']," he explained.

In other words, it won’t only be for vaccines going forward, but anyone who is fully vaccinated regardless of how long ago.

Amid the mandatory vaccination debates, the minister said, “We have no intention to use this to deny people without a certificate access to public services, but it could be used for entertainment venues, sports venues and the like.”

He said the department is also “aiming to integrate voter registration with the vaccination campaign” and that it was strongly advised for all voters and candidates to be vaccinated to “ensure that we have safe government elections on November 1”.

Another change is that the self-booking system is now activated, and those getting vaccinated can select the date, time and site of their choice. “At this stage, however, you can’t choose whether you want J&J or Pfizer” on the system, said Phaahla.

On the current third wave of Covid-19 in the country, he said, “We are steadily getting out of the grip of this third wave” but that this didn’t mean people should drop their guard.

Nationally, there has been a 24% drop in new cases compared to the average of the previous seven days, but only Gauteng and Limpopo are officially out of the third wave.

Case incidence is higher in the Northern Cape and Free State, and though KwaZulu-Natal has carried the highest percentage of all national infections recently, the minister said he was surprised that on Thursday it was the Western Cape.

Over a seven-day period, hospitalisation has gone down by 10% and the positivity rate (positive cases out of all tests) has come down to 12%, compared to the mid-July high of 35%.

However, this is still double what the World Health Organisation recommends as the safety barrier, which is for the positivity rate to be below 5%.

As of Thursday, said the minister, SA has officially lost more than 84,000 people to Covid-19.