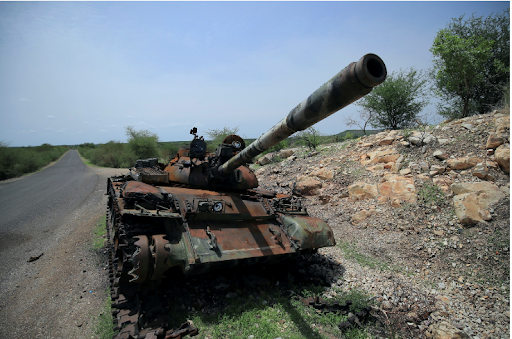 The United States is gravely concerned about fighting in parts of Ethiopia, the US State Department said on Friday, urging the Ethiopian government and rebellious forces from the Tigray region to start immediate negotiations to address the conflict.

"We urge the Ethiopian government and TPLF to enter at once into negotiations without preconditions toward a sustainable ceasefire," State Department spokesman Ned Price said in a statement, using an acronym for the Tigray People's Liberation Front.

Reports of continued human rights abuses and atrocities by parties to the conflict are deeply disturbing, including the reported attack on civilians in a village in the Amhara region this week, Price said.

The Tigrayan forces later issued a statement rejecting what they called a "fabricated allegation" by the Amhara regional government and denying any involvement in the killing of civilians.

"We condemn all such abuses against civilians in the strongest possible terms and call on all parties to the conflict to respect human rights and comply with their obligations under international humanitarian law," Price said.

There was no immediate comment from the office of Ethiopia's prime minister. The spokesperson of the Amhara regional government and Getachew Reda, a spokesman for the Tigrayan forces, did not immediately respond to requests for comment.

Eritrea's Information Minister Yemane Gebremeskel said: "Eritrea categorically rejects these intermittent accusations. Scapegoating Eritrea is neither constructive, nor will it serve the interests of peace and stability in the (Horn of Africa) region."

War broke out 10 months ago between Ethiopia's federal troops and forces loyal to the TPLF, which controls the Tigray region.

Since then, thousands have been killed and more than 2-million have fled their homes. Fighting spread in July from the Tigray region into the neighboring regions of Amhara and Afar, also in the country's north.

The United Nations said on Friday that it had completed its joint investigation with Ethiopia's state-appointed human rights commission of abuses in the Tigray conflict, with a final report due November 1.