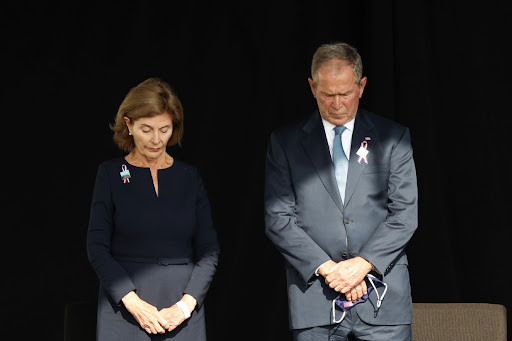 Former US President George W. Bush and his wife Laura attend an event commemorating the 20th anniversary of the September 11, 2001 attacks at the Flight 93 National Memorial in Stoystown, Pennsylvania, US on September 11, 2021.
Image: REUTERS/Hannah Beier

On the 20th anniversary of the deadliest attack on US soil, George W. Bush, who was US president at the time, warned of a new danger coming from within the country.

"We have seen growing evidence that the dangers to our country can come, not only across borders, but from violence that gathers within," Bush said on Saturday at the 9/11 memorial site in Shanksville, Pennsylvania during a ceremony to mark the anniversary of the September 11, 2001 attacks.

Bush, recalling the unity of the American people after the attacks, appealed for a return to that spirit amid growing political division in the country.

"When it comes to unity of America, those days seem distant from our own," he said. "Malign force seems at work in our common life ... so much of our politics has become a naked appeal to anger, fear and resentment."

The FBI on Saturday released the first document related to its investigation of the September 11, 2001, attacks on the United States and allegations ...
News
2 weeks ago

Bush and his wife Laura, as well as Vice President Kamala Harris, were attending a ceremony at the Shanksville site where United Airlines Flight 93 crashed after passengers overcame the hijackers. The plane crashed in a field, preventing another target from being hit.

"In the sacrifice of the first responders, in the mutual aid of strangers, in the solidarity of grief and grace, the actions of an enemy revealed the spirit of a people," Bush said, describing the country's reaction. "We were proud of our wounded nation."

The 9/11 attacks, which killed 3,000 people in New York, Washington and Shanksville, prompted Bush to launch a US-led invasion of Afghanistan that ousted the Taliban from control in Kabul and sent al Qaeda leader Osama bin Laden into hiding.

His administration's subsequent invasion of Iraq on the erroneous claim that Saddam Hussein's authoritarian government had illicit weapons of mass destruction diverted resources and attention from Afghanistan, leaving US strategy there adrift, former officials and experts say.

Biden's withdrawal of remaining US military forces in Afghanistan at the end of August, months after a deadline set by his predecessor Donald Trump, triggered harsh criticism from both Democrats and Republicans, as the lightning-fast Taliban takeover stranded Americans and Afghans seeking to evacuate.

In a July interview with German state broadcaster Deutsche Welle, Bush called the pullout a mistake and said he worried "the consequences are going to be unbelievably bad."

Speaking about US veterans who served in Afghanistan, Bush said "you have been a force for good in the world and nothing that has followed can tarnish your honor."