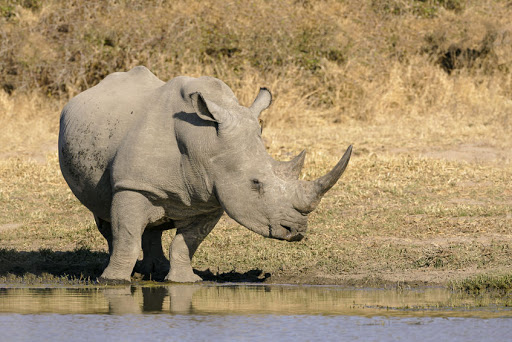 The researchers established that the rhinos did better in an upside-down position than when they were lying chest down or on their side.
Image: 123RF/Stuart Porter

A research study aimed at observing the effects of placing rhinoceroses in an upside-down position has won an Ig Nobel prize.

According to BBC Africa veterinarian Robin Radcliffe, who mainly deals with wildlife and is from Cornell University, along with his colleagues conducted the research in Namibia to see whether the health of the animals would be at risk when placed in that position under a helicopter.

The awards, which are traditionally held at Harvard University in the US, were virtual this year due to the Covid-19 pandemic.

BBC Africa reported that the winners walked away with a trophy they had to assemble themselves from a PDF printout and a cash prize in the form of a counterfeit 10-trillion dollar Zimbabwean banknote.

WATCH | Rhino ranch keeps poachers away, but at a cost

South Africa's largest private rhino breeder says he has kept the protected animals safe from poachers for four and a half years but cannot continue ...
News
1 week ago

The 12 rhinos were in an upside-down position for 10 minutes and though this practice has been done before in African conservation work, it was mainly to move rhinos between areas of fragmented habitat.

It was the first time this activity was done to probe that the tranquillised animals' heart and lung function coped with upside-down flying, said Radcliffe.

The research found that the animals coped exceptionally well. The researchers also established that the rhinos did better in this position than when they were lying chest down or on their side.

“We've also seen that rhinos that are on their side too long, or on their sternum especially,  they get muscle damage, they get myopathy, because they're so heavy. And there's no pressure on their legs, other than the sense of the strap around their ankle,” Radcliffe said.