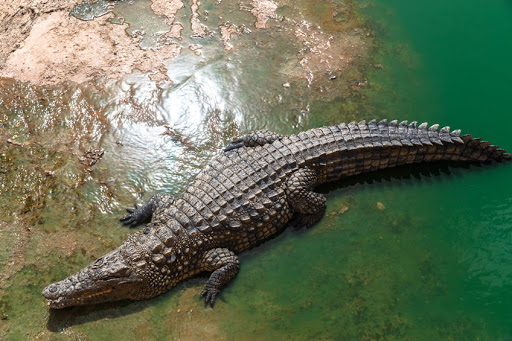 Crocodiles have prevented SAPS officers from destroying an illegal makeshift bridge over the Limpopo River linking SA and Zimbabwe.

In defence, police shot at the advancing crocodiles while retreating from the wooden bridge.

Limpopo police spokesperson Brig Motlafela Mojapelo said the crocodiles wanted to “feast on police officers” and the reptiles “were in abundance, patrolling the area” when the incident happened on Thursday.

He added that the bridge would be destroyed in the coming week but this time with the help of the SA National Defence Force (SANDF).

“A small part of the bridge was destroyed. The SANDF was notified and they will also come assist,” he said.

Every week, SA is deporting, on average, 100 Zimbabweans through the Beitbridge border crossing.
News
2 months ago

The wooden bridge, 3km west of the main border post, was erected by smugglers about a month ago to move goods between SA and Zimbabwe.

The Zimbabwe Republic Police got wind of the bridge from reports carried by a local online publication, Beitbridge Eye, and engaged their SA counterparts last week on Monday.

Since it was easier to destroy the bridge from the SA side, it was agreed that the SAPS would undertake the operation.

The Beitbridge border has been closed for human traffic for months due to Covid-19 containment measures by both countries. This has led to an increase in smuggling involving cross-border traders.

The “Wooden Border Post” as it came to be known became a conduit for groceries, electrical goods, fuel and other basic commodities needed in Zimbabwe.

From Zimbabwe it provided a passage for undocumented travellers, contraband cigarettes, and precious minerals.

The Zimbabwe National Chamber of Commerce estimates about R1bn of revenue is lost annually through smuggling from SA.

Zimbabwean police have, since January, arrested 46,000 people for border post-related crimes, the majority of them smuggling.

Goods worth at least R14m were confiscated by the Zimbabwean authorities.