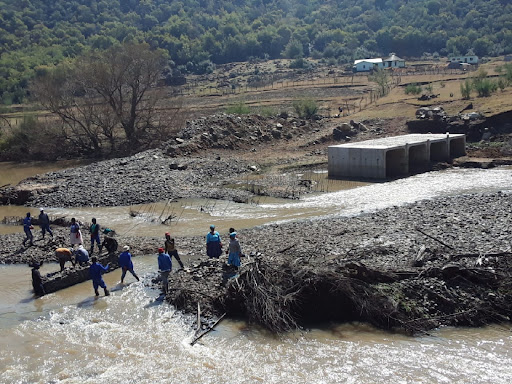 The Silindini village lies between a mountain and the Umzimvubu River. Those seeking medical treatment have to travel 7km by crossing the rocky mountain or try to cross the river.
Image: SUPPLIED

In Silindini village, located in a deep rural part of KwaBhaca, strong village men have to carry the sick on a bed tied to two poles, which they raise over their shoulders, then cross a steep mountain with a dense forest, to reach a gravel road where an ambulance can pick up the patient for transportation to hospital.

The journey covers about 7km to get to a spot that is accessible to an ambulance.

Even when preparing for funerals, hearses reportedly leave the coffins about 5km from the village.

The men carry the coffins with their bare hands, then have to cross the Umzimvubu River to get back to their village.

This is despite Umzimvubu municipal authorities having promised to build them a proper bridge as far back as 2017.

In an unimaginable act of bravery, a group of villagers in Port St Johns (PSJ), risked their lives on Wednesday by jumping into floodwaters to ...
News
3 months ago

Three lone cement culverts placed in the river serve as a reminder of that promise.

Silindini community leader Mbulelo Siyomo said they were starting to believe they were wasting their votes every time there were elections for a new government or municipal leadership.

“We have been voting [in local government elections] since 2004, and we are now on our third ward councillor, but we are still suffering.

“We don’t have electricity and we don’t have water or toilets here. There is just nothing,” he said.

He told DispatchLIVE that visited Silindini on Friday that more than R8.1m had been allocated towards building them a proper bridge.

However, the contractor bolted after a few months without even completing half the job.

Only a donkey cart can get coffin to grave

Roads in one Eastern Cape village are so bad that a funeral parlour has  to hire a donkey cart to take a coffin to the graveyard. In some ...
News
7 months ago

“Many people have drowned trying to cross the river to get to a gravel road where they can hitch a lift to town or to a nearby clinic. We are suffering because our government does not care about us,” Siyomo said.

However, a new contractor was found working on site this week. The owner of the firm said he had been given instructions to complete the bridge within a month. Several Silindini residents were employed in the project.

Mother of six and fellow villager Mangoyi Tshika said many pregnant women had given birth while trying to cross the mountain.

Sometimes they begged homeowners in other villages closer to town, to house pregnant women until they gave birth.

“At least then they are closer to town and an ambulance is able to pick them up. Otherwise they don’t drive to these parts of the world at all,” she said.

Schoolchildren, some as young as five, have to go over the same mountain, as the nearest schools are in another village.

Tshika said new mothers were also expected to either go over the mountain or across the river to get to a clinic.

“They have to cross the river with their babies on their backs. Our rights as human beings are being violated by the same government that is supposed to look out for us. It’s really sad.”

She said at least five people had died trying to cross the Umzimvubu.

Residents of three Whittlesea villages marched to the department of roads and public works in the Chris Hani region, saying floods had cut them off ...
News
2 years ago

The villagers also told DispatchLIVE they did not have access to clean water and had to drink river water which is used by pigs, sheep, goats and cows.

No-one owns a television set and Silindini residents say they have to walk more than 7km to the next village to recharge their cellphones in other people’s homes.

Umzimvubu municipality mayor Sobane Mnukwa admitted that the project to build the people of Silindini a bridge had run into difficulty.

He said when the first contractor started, the area had experienced heavy rains, which affected the banks of the river where the bridge was to be built. That also inadvertently affected the scope of the work.

It was then that the contractor insisted on a 50% variation order for the project to be completed.

Mnukwa confirmed the new contractor was given this month to finish construction of the bridge, barring inclement weather conditions.

Umzimvubu municipal spokesperson Nokhanyo Zembe said contrary to the claims that the village did not have electricity, only eight houses were yet to be connected to the power grid in Silindini.