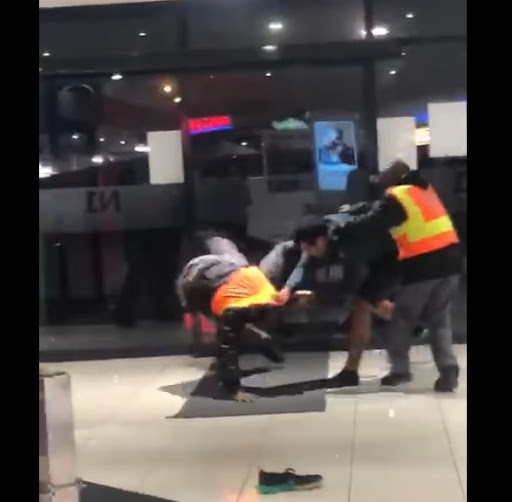 In a viral video, the man is seen getting into a physical altercation with three security guards at the mall.
Image: Screengrab of video

A 31-year-old man was arrested after getting into a brawl with security guards over an alleged act of public indecency at the N1 City Mall in Cape Town.

Footage of the altercation with three security guards found its way onto social media but events leading up to the punches being traded, kicks and bouts of wrestling were initially unclear.

During the brief video clip one of the guards was slammed into a glass door or window and then thrown to the ground by the man, who appeared to have lost a shoe in the fracas.

Police spokesperson Sgt Wesley Twigg said the man was subsequently arrested for having  allegedly “exposed himself to a female”.

The man was arrested and appeared in the Goodwood magistrate’s court on a public indecency charge on September 13.

When you hire poorly trained security

In a separate incident at the mall on Tuesday, an exchange between a passenger and the driver of an e-hailing vehicle as they arrived at the shopping centre became physical, but there were no serious injuries.

In that case, the perpetrator was also arrested.