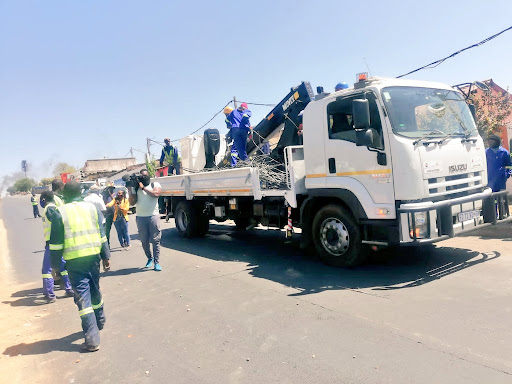 A man was killed during power cut protests in Alexandra.
Image: City Power

Gauteng police on Wednesday confirmed a man believed to have been part of the protest action against City Power’s disconnection of illegal power connections in Alexandra was shot dead.

The incident happened on Tuesday in the Riverpark area, where the Johannesburg metro police department was providing support to the City Power team.

“It is alleged a security guard from Alex Mall fired a shot towards the protesters,” said police spokesperson Brig Brenda Muridili.

“It was then discovered that a protester, aged 27, was hit. He was rushed to hospital where he was declared dead on arrival,” Muridili said.

Ndumiseni Khetho Zuma appeared briefly in the Pietermaritzburg magistrate's court on Monday in connection with the burning of the Brookside Mall in ...
News
2 months ago

Police have opened a murder case against the security guard who allegedly fired the deadly shot.

He has been taken into custody and his gun seized for ballistic testing.

The 43-year-old is set to appear in the Alexandra magistrate's court soon.

A confrontation ensued between mall security and some protesters who wanted to force their way into the mall, said the entity’s spokesperson, Isaac Mangena.

“We can confirm this incident happened long after City Power and its contractors left the area.”