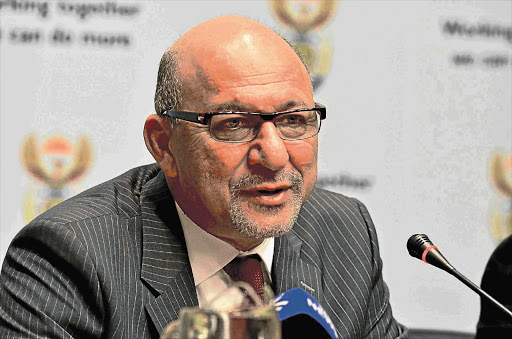 The Constitutional Court has dismissed former finance minister Trevor Manuel's application for leave to appeal against the Supreme Court of Appeal's [SCA] dismissal of a ruling that the EFF pay him R500,000 in damages and apologise to him.

Manuel wanted the apex court to reinstate the R500,000 in defamation damages he won against the EFF. But a ConCourt order dated September 15 dismissed Manuel's application, saying it is not in the interests of justice to hear the matter at this stage.

The EFF accused Manuel of nepotism and of overseeing a “corrupt process” when he, as chairperson of a committee appointed to advise President Cyril Ramaphosa on the appointment of a new commissioner for Sars in 2019, recommended that Edward Kieswetter be given the job.

Manuel approached the ConCourt earlier this year after the SCA, despite upholding a Gauteng high court ruling that the EFF had unlawfully defamed him and should remove the defamatory statement from all its media accounts including from the party's and party leader Julius Malema's Twitter accounts, blocked the damages payment and the apology.

The SCA has dismissed the EFF's appeal against a high court judgment which ruled that comments the party's leader Julius Malema made about former ...
Politics
1 year ago

The SCA, last December, said claiming damages in application proceedings without hearing oral evidence was not permissible and referred Manuel's claims to the high court to be pursued through a trial action.

Additionally, the court said, the amount awarded appeared extraordinarily high and not in line with the recent general trend.

“It is clear that the dispute about the extent of Mr Manuel’s asserted reputational loss could be fully explored and resolved by way of oral evidence,” it said.

“Mr Manuel could, notionally, present evidence that those within and beyond his circle of associates and friends, were taken in by what was said by the applicants [EFF] and consequently thought less of him, and that some people did, in fact, shun him.

“A cross-examiner might enquire of Mr Manuel whether his friends abandoned him, or whether he was dropped from any of the boards of companies on which he sits. He could be asked whether the reaction to the defamatory statement by those within his circle was that he should ignore whatever the applicants said because the statements complained of was typical of them,” said the SCA.

The SCA said the high court's order for a retraction and apology was made in conjunction with its order for damages and since [the SCA] held that the order for damages should not have been made without hearing evidence, an order on whether an apology should be made is inextricably bound up with the question of damages.

It referred both matters back to the high court for consideration.

In March 2019, the EFF published a statement on its Twitter account saying: “It has now emerged that the reason is that, one of the candidates who was interviewed, and favoured by the panel, is a dodgy character called Edward Kieswetter, who is not just a relative of Trevor Manuel, but a close business associate and companion”.

It said this was the reason the Sars selection process was conducted in secret.

Manuel demanded the party retract the statement and when they rebuffed him, he went to court, suing Malema and the then party spokesperson Mbuyiseni Ndlozi who had issued the statement.

The high court held that the statement was defamatory and ordered that it be removed from both the EFF's and Malema's Twitter accounts and that a retraction and apology be published. It also awarded Manuel damages of R500,000.

It was then that Ndlozi, Malema and the EFF went to the SCA.