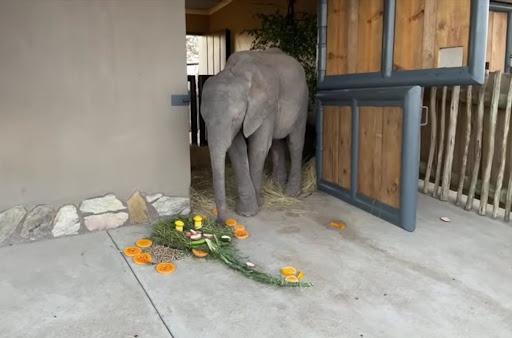 Khanyisa the baby elephant with her birthday 'cake'.
Image: HERD

Close to 7,000 people around the world attended a virtual birthday party for Khanyisa, a rare albino baby elephant weighing 345kg.

The jumbo, who turned two, has been a resident at Hoedspruit Elephant Rehabilitation and Development (Herd) in Limpopo since last year after being found trapped in a snare with severe injuries. She has been cared for by the sanctuary since then.

To mark the birthday Herd invited Khaniysa’s followers and donors from around the world to watch the celebration live on Sunday.

There no were no balloons, candles or party packs as Herd founder Adine Roode did not want to “humanise” the celebration. Instead she and a carer made an elephant-shaped “cake” for Khanyisa with some of her favourite foods, including raw butternut, sweet potatoes and sweetcorn.

“Everyone wanted candles and balloons. She is an elephant and we need to respect that. I didn’t feel comfortable humanising her birthday,” said Roode. 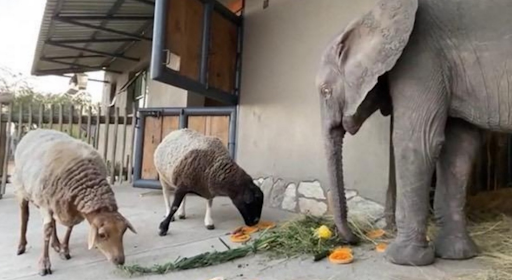 Khanyisa and her companians Lammie and Nungu tuck into birthday cake
Image: HERD

“One day we will need to let her go and she needs to be a wild elephant again. We are so fortunate to be celebrating Khanyisa’s second birthday. There were times when I didn’t think she would reach this age.

“She has touched so many people and they continue to enjoy her story.”

The party was attended by her resident companions, two sheep named Lammie and Nungu.

Khanyisa has a following of fans across the globe who contribute to helping Herd with her growth and rehabilitation.

Thailand's Mana Srivate has performed dozens of resuscitation attempts in his 26 years as a rescue worker, but never before on an elephant.
News
11 months ago

As an albino, the elephant is more visible in the bush and thus susceptible to attacks by predators. It also means her eyes are more sensitive to light. However, albino elephants have been known to survive in the wild.

“Her rehabilitation from a four-month-old snare victim weighing 124kg to a recovered and integrated, bold, brave, more than 345kg elephant has been a challenging but incredibly rewarding journey,” said Roode.

“It has shown us the capacity for selflessness, compassion and generosity of humankind  worldwide.

“Khanyisa and her path alongside Lammie the loving legend, new nanny Nungu, her human herd of carers, and her elephant family of 15 welcoming elephants has inspired us through the good and difficult times.”