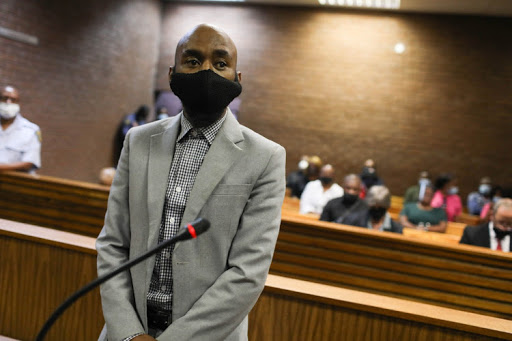 Ntuthuko Shoba has a new legal team and hopes to bring a third application to be released on bail. File photo.
Image: Alaister Russel/Sunday Times

The case against Ntuthuko Shoba, alleged mastermind behind the killing of his pregnant girlfriend Tshegofatso Pule, hit a few hurdles on what would have been the first day of his trial on Monday.

By lunchtime on Monday his lawyer Norman Makhubela was yet to arrive at the high court sitting in Johannesburg, much to the ire of the judge.

Other matters were attended to in the packed courtroom as Shoba waited for his matter to be called.

Dressed in a blue blazer, shirt and jeans, Shoba took his place amid other people waiting for their cases to be heard.

Pule’s family, friends and other supporters packed the courtroom, waiting for proceedings to commence. Among those in the gallery was social development minister Lindiwe Zulu.

Ntuthuko Shoba, the alleged mastermind in the murder of Tshegofatso Pule, lost his third bail bid in the Johannesburg high court on Wednesday.
News
10 months ago

Pule’s murder shocked the nation in June 2020. She was eight months pregnant when she was found murdered, hanging from a tree. The prosecution has led evidence that her unborn child was Shoba's.

Shoba allegedly used the services of a hitman to carry out Pule’s murder. The hitman, Muzikayise Malephane, was arrested, pleaded guilty to the killing and is already serving a  20-year sentence. Malephane had entered into a plea agreement with the state and confessed to his part in Pule’s murder, alleging that Shoba wanted her dead because he feared his “wife” would find out about her pregnancy.

Shoba was arrested and has on three occasions tried, but failed, to secure bail.

In a previous attempt for bail in April, Shoba said Malephane may have been the baby’s father. He claimed this information was shared with him by a fellow awaiting-trial inmate at the Krugersdorp Correctional Centre.

He said his cellmate John Thweky Mohabe told him Malephane had confessed to being Pule’s boyfriend. But even this alleged motivation for Malephane to have planned and orchestrated Pule's murder was not enough to convince the court to release Shoba on bail.

On Monday, ahead of the start of his trial, scores of demonstrators descended on the court precinct — some clad in ANC and EFF regalia.

“Say no to GBV” was printed on some of their T-shirts and placards.

Speaking before proceedings, Tumisang Katake for the Pule family said: “As a family, we really don’t know what to expect but honestly, we just want the trial to start so that we can get over this and put it behind us. It’s tormenting and traumatising for us. We just want it behind us so that we can continue living our lives and start to mourn Tshegofatso.”

Meanwhile, a group of people from a foundation named in honour of the murdered woman also arrived in numbers.

Botlhale Modisane said since the Tshegofatso Pule Foundation was launched several months ago, it had been supporting other families who had lost loved ones to gender-based violence.