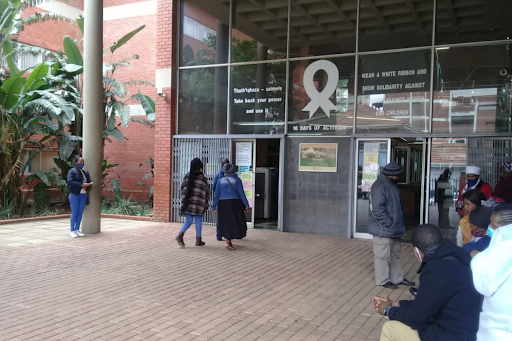 The bail application of Mdumiseni Zuma, a former security guard who was allegedly behind the fire at Brookside Mall in Pietermaritzburg in July, was adjourned in the magistrate's court on Tuesday.
Image: Mfundo Mkhize

Pietermaritzburg magistrate Nitesh Binessarie has reserved judgment in the bail application of a former security guard who is accused of instigating violence and looting at the Brookside Mall during unrest in the city in July.

Mdumiseni Zuma, 35, who is charged with intent to commit public violence and arson, has pleaded not guilty to the charges.

On Monday, the court heard Zuma had previously been dismissed from Braber Security Services for a misconduct offence prior to joining Capi Security. Zuma was a security guard for one of the mall’s tenants.

This was revealed by Hawks investigator Lt-Col Anton Booysen during cross-examination on Tuesday.

Zuma, who is originally from Nkandla, was living in the Jika Joe informal settlement, a stone’s throw from the mall set alight in July during riots initially fuelled by the incarceration of former president Jacob Zuma.

The party is wary of causing further divisions, saying it will discipline instigators after they are investigated and prosecuted by the state
News
1 year ago

The state has submitted video evidence in which Zuma is captured telling his comrades the Brookside Mall was closed on July 11. He said should the mall reopen the following day, they should destroy everything. The mall went up in flames on July 12.

Booysen said there was video evidence of an African male, understood to be Zuma, who is walking in the mall.

“What is clear is that the man had been wearing a formal white top with a Fabiani logo on the shoulder. The language used by a man taking a selfie is Zulu,” said Booysen.

Zuma was nabbed at the informal settlement after being on the run during the aftermath of the riots.

The court was also told Zuma had abandoned his post as a security guard and his abrupt disappearance puzzled his employer.

During his arrest two weeks after the fire, Zuma was found with merchandise and items from the mall in the video.

“When we enquired about the blue shoes, he looked under his bed, where we found the shoes among other shoes,” said Booysen.

Ndlovu said his client would not interfere with the state witnesses and was not a flight risk as he did not possess a passport, nor he did have relatives outside KwaZulu-Natal.

State advocate Thabisile Ncanana said they were opposing bail due to the strong evidence against him and he would pose a danger to the public.

“When the accused committed the crime, he did not regard public safety,”  she said.

She questioned his credibility, saying Zuma didn’t admit he had abandoned his job when asked about his employment.