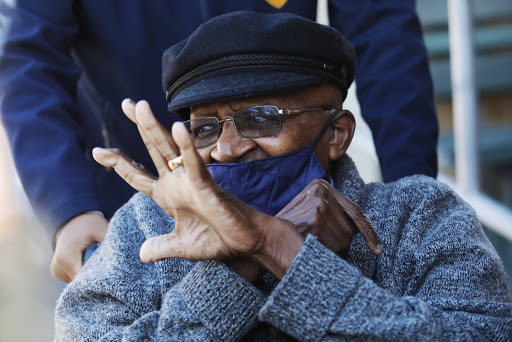 Dr Mamphela Ramphele said in a statement on behalf of the Archbishop Desmond Tutu Intellectual Property (IP) Trust on Wednesday that a “deluge of love and well-wishes” was pouring in to Cape Town, where Tutu lives, from individuals and organisations around the world ahead of his milestone birthday celebration.

“Besides planning to attend a special thanksgiving service at St George’s Cathedral in the city, the Archbishop and Mrs Leah Tutu will spend the day at home surrounded by family including grandchildren and great-grandchildren,” said Ramphele.

“Among close family members who have travelled to Cape Town this week are two of the couple’s overseas-based daughters, Naomi and Mpho, and the Archbishop’s sister, Mrs Gloria Radebe, from Krugersdorp.”

The occasion will be marked by a series of events arranged by the Desmond and Leah Tutu Foundation. These include an online presentation of the 11th annual Desmond Tutu International Peace Lecture.

Defacing of Tutu mural a reminder that curse of racism still exists in SA: Ramphele

'For this hatred to be repeated, decades later, on a mural of the archbishop in central Cape Town, casts a slur on our democracy.'
News
7 months ago

“On behalf of the Archbishop and Mrs Tutu, we’d like to thank everyone who has contributed to making this week special, including all who have sent birthday greetings, cards and flowers.”

On Tutu’s 80th birthday in 2011, he held a press conference in which he fumed that the SA government had failed to process the 14th Dalai Lama’s visa in time for him to attend his birthday celebrations that year. There was speculation that the Chinese government had put pressure on Pretoria not to allow him into the country.

It was the second consecutive year that Dalai Lama’s visa was not authorised.

As the spiritual leader of the Tibetan people, and in the Buddhist religion, the Dalai Lama is considered a dangerous political dissident by the Chinese government.

During a rousing off-the-cuff speech at the time, Tutu accused the government of being worse than the apartheid government as it turned a blind eye to what he called the “vicious” suppression of Tibetans.

Tutu and the 14th Dalai Lama, both Nobel Peace Prize laureates, co-authored the 2016 book The Book of Joy.