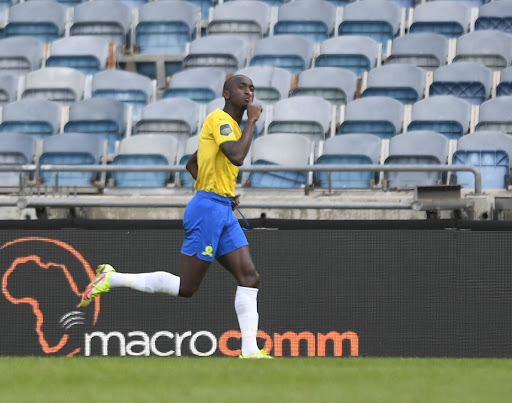 Rampant champions Mamelodi Sundowns cleaned up at the Premier Soccer League's (PSL) monthly awards on Wednesday‚ winning the coach and player prizes for August and September.

Red-hot Namibian striker Peter Shalulile walked away with the player of the month award after scoring five goals in the opening six league matches, while co-coaches Manqoba Mnqgithi and Rulani Mokwena were crowned the DStv Premiership mentors of the months under consideration.

Shalulile’s goals carried Sundowns to the top of the Premiership log standings after they collected 16 points from a possible 18.

Sundowns work so hard they approach matches feeling they are entitled to win, says Mokwena

Mamelodi Sundowns have an aura of invincibility about them already at this early stage of the season but co-coach Rulani Mokwena said the champions ...
Sport
2 weeks ago

The champions are yet to concede a goal in their opening six Premiership encounters.

The league-winning coaches have also created amazing continuity within the team in the new season, by getting new recruits such as Grant Kekana, Thabiso Kutumela and Neo Maema to gel and play the Brazilians' style of football.

The Sundowns coaching duo of Mnqgithi and Mokwena beat Royal’s John Maduka and SuperSport United’s Kaitano Tembo to the award.

Shalulile’s Namibian teammate and Orlando Pirates winger Deon Hotto won the goal of the month for his stunning free kick against Stellenbosch.

Shalulile, Hotto and the Sundowns co-coaches will receive a trophy and R7,000 for their award, courtesy of league sponsors, DStv.