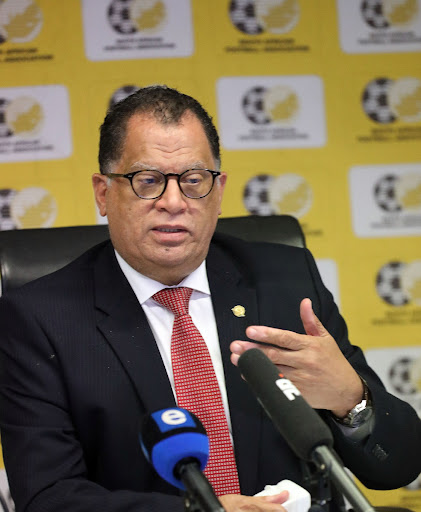 Safa president Danny Jordaan says the pilot project of having fans at FNB Stadium on Tuesday was a resounding success.
Image: Veli Nhlapo

SA Football Association (Safa) president Danny Jordaan has said that they passed the pilot project of welcoming fans back to the stadium during Bafana Bafana’s 1-0 win over Ethiopia on Tuesday with flying colours.

Bafana narrowly beat Ethiopia during their 2022 Qatar FIFA World Cup qualifier at FNB Stadium to return to the top of Group G with 10 points in the match that was watched by about excited 2,000 fans.

“We passed the pilot project with flying colours,” said Jordaan, adding that they hope to increase the numbers going forward after Tuesday's resounding success.

“We are going to send a proposal to the government to request that we increase the percentage of the attendance for the home game against Zimbabwe next month. As we initially projected, we want South Africans to get vaccinated so that we return to our daily lives.

“We want the medium business and informal sector that derives income from football to return and be able to benefit financially,” said Jordaan.

The SA Football Association has thanked sports minister Nathi Mthethwa and his health counterpart Joe Phaahla after they supported the Nasrec-based ...
Sport
3 months ago

Jordaan also took time to praise Bafana coach Hugo Broos, who has guided the team to top of their group, one ahead of second-placed Ghana, after four qualifying matches.

“On behalf of everyone, I would like to congratulate coach Hugo Broos for bringing back the excitement and renewed hope in our senior men’s national team. While the job is not yet complete, garnering 10 points from four games is worth praising, especially with this relatively young team.

“We got the six points we needed from Ethiopia and now the next two games against Zimbabwe and Ghana will be quite interesting. Well done to coach Broos, the entire team and technical staff.”

Jordaan also praised the spectators who created a lively atmosphere as they returned to the stadium for the first match in about two years since the outbreak of coronavirus.

“The spectators provided that missing link within the stadium and I would like to thank [them for] their discipline and the vibrancy they created once the match had started,” he said.