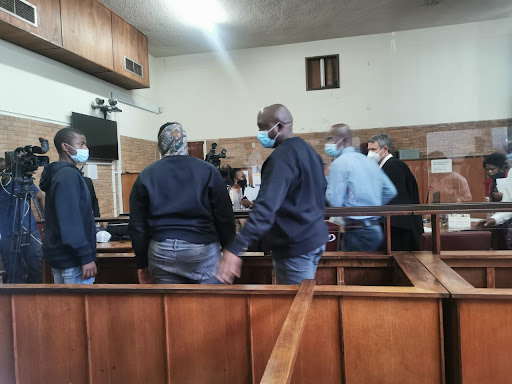 Former Mpumalanga agriculture MEC Mandla Msibi, right, and his co-accused will have their bail applications heard on Friday.
Image: NPA

Former Mpumalanga agriculture MEC Mandla Msibi will spend another night in custody as his bail application was on Thursday rolled over to Friday.

Msibi was arrested on Monday on two murder and one attempted murder charges. He has been in custody since then.

Nyuswa said the investigating officer had completed his testimony and was cross-examined on Thursday. The court will on Friday hear closing arguments from the state and the defence.

Mpumalanga premier Refilwe Mtshweni-Tsipane confirmed that Mandla Msibi, who has been charged with murder and remains in police custody, was removed ...
News
2 weeks ago

Msibi, who was a member of the ANC’s provincial executive committee, is facing charges linked to an incident on August 22. He is alleged to have been involved in a shooting in which two people were killed and a third wounded.

Msibi has been removed from his position as MEC for agriculture, rural development, land, and environmental affairs — while the ANC in the province has said his arrest and charge for the double murder would be damaging to its election ambitions.

On Wednesday, the Nelspruit magistrate's court, where Msibi was due to appear for a second day, was evacuated after a bomb scare.