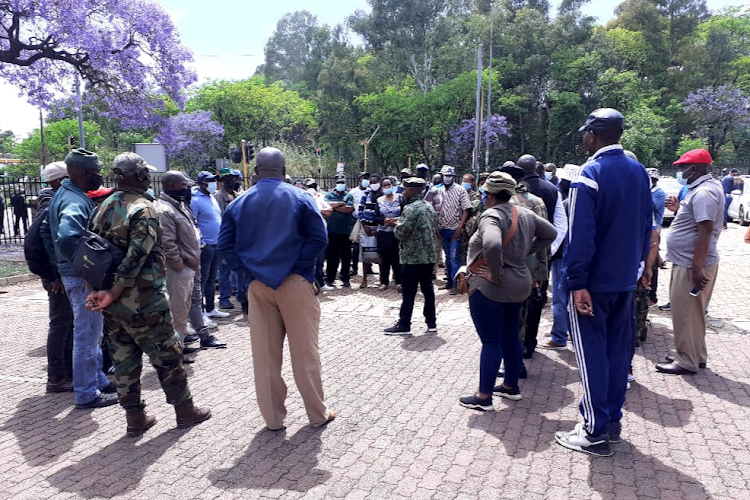 Supporters gathered outside the Kgosi Mampuru prison on Monday when 53 people appeared in a courtroom within the correctional facility.
Image: Shonisani Tshikalange/TimesLIVE

The bail application for military veterans accused of holding two cabinet ministers hostage last week will be heard on Tuesday.

On Monday, 53 people appeared in a courtroom within the Kgosi Mampuru prison in Tshwane.

The prosecution failed in its bid to have the case postponed.

The state had told the court they were not ready to continue as they had insufficient information, including verifications of addresses and profiles.

The group is accused of holding hostage defence minister Thandi Modise and minister in the presidency Mondli Gungubele at the Saint George Hotel on Thursday.

After a meeting with the ministers involving veterans turned sour, the minister were barred from leaving the room until consensus had been reached on certain demands made by the vets, including reparations.

Police and security forces intervened to rescue the ministers.

‘What hostage situation?’ Veterans issue denial and call for release of arrested 56

The disbanded Umkhonto we Sizwe Military Veterans Association has demanded the immediate release of 56 people arrested for allegedly holding two ...
Politics
7 months ago