‘Is he gambling with his health?’: SA reacts to Zuma spotted out and about at Durban casino 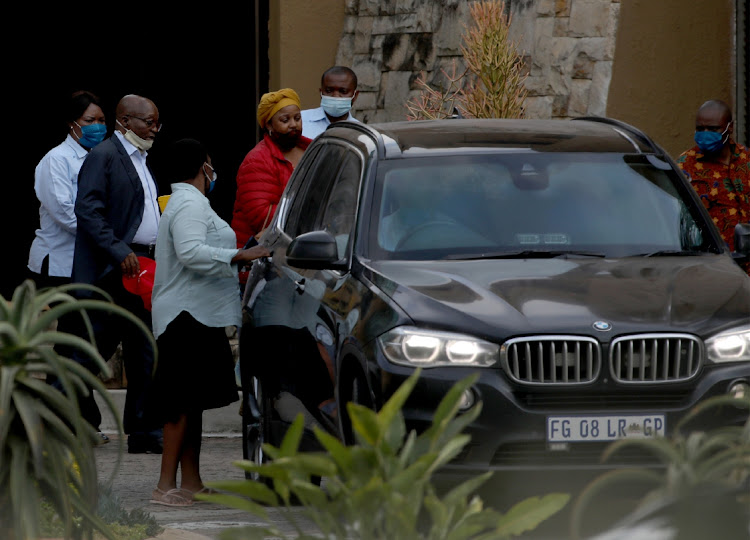 Images of former president Jacob spotted out and about at Sibaya Casino near Durban have sparked a major debate online, with many questioning the condition of his undisclosed illness and parole.

According to a Sunday Times report, Zuma was caught on camera in public for the first time since being granted parole after being sentenced to 15 months for ignoring a Constitutional Court order.

It received a tip-off that Zuma was holding a “meeting” at the casino owned by his friend, Durban businessman Vivian Reddy.

WATCH | Jacob Zuma from Nkandla: ‘Something has gone terribly wrong in SA’

Former president Jacob Zuma gave a 50-minute speech on Thursday from his home in Nkandla, where he is serving the remainder of his 15-month prison ...
News
3 months ago

The eyebrow-raising meeting comes after Zuma told a crowd gathered outside his Nkandla homestead on Thursday that he could only speak to them via video because of “very strict parole conditions”.

“Yes, I remain a prisoner, under very strict parole conditions. It feels like what house arrest and banning orders must have felt like during the colonial-apartheid government,” Zuma told his supporters.

However, department of correctional services spokesperson Singabakho Nxumalo said Zuma’s casino visit was above board.

He said Zuma made a request to leave his residence to be in another town and this was approved by his monitoring official.

Responding to the report, Zuma's daughter Duduzile Zuma-Sambudla said her father was under house arrest.

Defiant Zuma hits out at Zondo in address to supporters

She said the ANC would be proven wrong if Zuma, among other things, was seen playing golf.

“I think there are different circumstances to different situations. So if every situation is going to have a particular narrative, we are not going to allow ourselves to understand what the truth is and what isn’t,” said Duarte.

“The Schabir Shaik behaviour may have been wrong, but we cannot assume that comrade Zuma is not ill and will behave like Schabir Shaik. I think that’s not quite right.

“All I’m saying is that the world is much bigger than one perspective. If there is a mistake then we will be wrong. If we see comrade Zuma going to play golf, for instance, then, of course, you are right and we are wrong,” she said.

On social media, many weighed in on the photo, with some likening him to Shaik and others saying it was his business what he does.

Think about it! You defy all and get sent to prison for 15 months but get out in 2 months wouldn't you also be trying your luck at the casino like Jacob Zuma?

I see Jacob Zuma has been spotted at a Durban casino...wow he can't be gambling with his health being terminally ill and an old man as described by Mpofu.....what a miraculous recovery old man.

The “terminally ill” Zuma out and about at the Sibaya Casino with Dudu Myeni. An absolute mockery of the justice system.

Zuma spotted one a #CASINO

This is our ex President enjoying his medical parole.

Did he go to church, did he go and see his supporters??
No, he went to a casino. https://t.co/54fNuDqHgM

Under CR, Zuma visits casinos while on medical parole, Mkhize remains a MP after embezzling millions, Esidimeni guilty still free, the 12 'insurrectors" remain unnamed and the NPA has budgets cut while pvt VIP security gets more.. But can't halt a hostage situation..

At his old age,so he is no longer afraid of contacting covid 19?cos thats one of the reason given to court.