'State does not know what to charge them with': Dali Mpofu defends war veterans in court 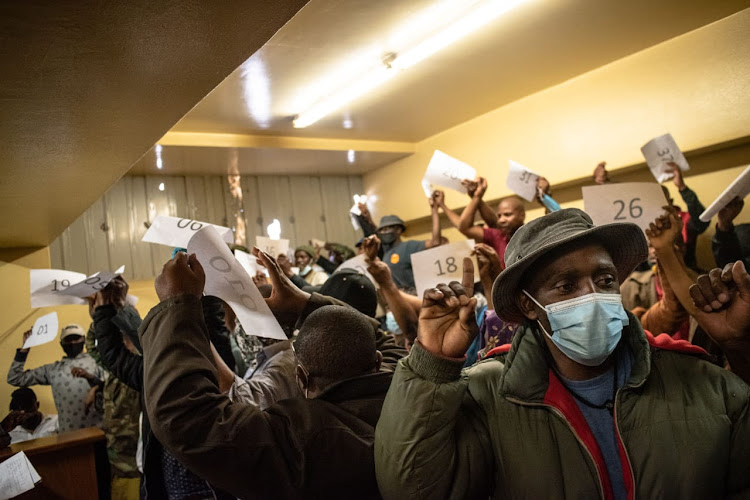 The men and women, barring one accused who was in hospital, made their first appearance on Monday. They face five counts of kidnapping but National Prosecuting Authority (NPA) spokesperson Lumka Mahanjana said the state may add more charges.

On Monday the state asked the court for a seven-day postponement to attend to these issues but magistrate Bheki Ntshingila dismissed the application, ordering the formal bail application to proceed on Tuesday.

The defence team opposed the state application for a postponement.

The bail application for military veterans accused of holding two cabinet ministers hostage last week will be heard on Tuesday.
News
9 months ago

Mahanjana said the state would proceed on Tuesday with the bail application.

As military veterans sang outside, inside court the accused could be heard singing a struggle song.

The accused held numbers written on white sheets of paper as they appeared. The number of accused was reduced from 56 to 53 after three were found to be hotel staff and released. The accused ranged in age from the mid-40s to 63.

Dali Mpofu, speaking on behalf of the defence team, told the court the state did not know what the charges were.

“The state doesn't know what it wants to charge the people with or whether to charge them at all. We don't even know what they are in for, the best that my learned friend said was that it is a preliminary charge of kidnapping,” he said.

The only kidnapping that is happening here is of these people in this room.

Mpofu said the verification of addresses should have been done in 12 hours, while more than 100 hours had already passed.

“That has not been done, at least for one person. Each person here is an individual bearer of constitutional rights,” he said.

He told the court that the state had intended making the application for a postponement before the proceedings got under way.

“To come to court three days later and have nothing to show for the interviews [they held with the suspects] is unacceptable. There is nothing to justify — you cannot take someone's right and lock them in the room and do not have anything to justify that.

“The only kidnapping that is happening here is of these people in this room.”

Mpofu argued that it was clearly a case of unlawful arrest and unlawful detention.