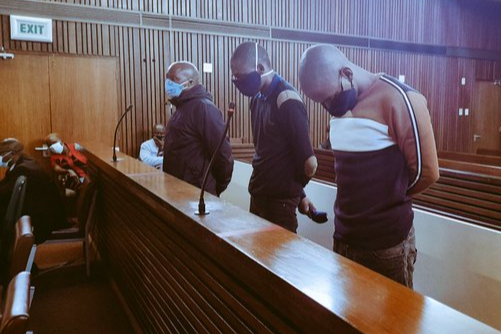 Thokozani Msibi, the traditional healer and mastermind in the killing of Mpumalanga teenager Gabisile Shabane, was on Wednesday found guilty of all charges, including murdering her and violating her corpse.

The verdict was handed down by judge Heinrich Brauckmann in the high court in Mpumalanga.

The other two accused, Knowledge Mhlanga and Brilliant Mkhize, were found guilty of the same crimes. Brauckmann found that all three men acted with a common purpose.

He said the three were brought together by greed. Mhlanga and Mkhize had believed what Msibi had told them – that the body parts of a person living with albinism could lead to their riches.

Shabane, 13, was kidnapped along with her 15-month-old nephew, Nkosikhona Ngwenya, from their home in Hlalanikahle in Emalahleni (formerly Witbank) in 2018.

Seated in the front of the courtroom is #GabsileShabane's mother, Anna who watched helplessly as the group of armed men made off with her daughter, living with albinism in Jan 2018 and her grandchild, Nkosikhona. The toddler's mother, Mpumi is also present in court. @TimesLIVE

According to previous witness testimony, Nkosikhona was an unintended casualty in the kidnapping. The intruders had mistaken the light-skinned toddler for another child living with albinism in the same house. When they realised their mistake, they allegedly tossed Nkosikhona into a swamp near the N4, where he drowned. His decomposed body was found weeks later.

The court has heard how Shabane, on the other hand, was forced to drink an alcoholic drink laced with brake fluid and also smoke dagga before she was killed and dismembered. Her body parts were removed and she was buried in a shallow grave on a farm in Cullinan which witnesses said belonged to Msibi.

Several days later, her killers returned to the grave, where they beheaded her corpse and even chopped off her hands – all in a bid to make their muti even more powerful.

Some of Shabane’s body parts – including a portion of her skull and a hand – were found at the premises where Msibi consulted, while other parts had, according to previous state witnesses, already been sold to other clients. The rest of the corpse was found in Cullinan.

Traditional healer accused of killing child with albinism denies it all

Despite body parts being found in his hut, Thokozani Msibi, the traditional healer and alleged mastermind in the killing of Gabisile Shabane, has ...
News
8 months ago

The case was cracked open by two crucial witnesses.

John Magutshwa, after being arrested, spilled the beans on how he had taken part in the killing. He spoke in detail about how he had joined the accused in searching for a person with albinism, driving around the streets of Emalahleni.

He also detailed his part in the crime, explaining how he had chopped off Shabane's head and hands. He too had hoped to be given muti which was to be concocted by Msibi, which he believed would change his life. Magutshwa turned state witness and will not spend a day in jail for his role in the crime.

Another witness, Mr X, who cannot be named and is in witness protection, testified that he joined his friend Msibi and Mkhize to drive around Emalahleni hunting for a person with albinism who they could use for the rituals. Mr X was one of the last people to see Shabane alive. He said he was not part of her abduction, killing or mutilation, but admitted to taking part in her burial.

Mr X could also have been charged with conspiracy to commit murder, but the state said it had to let go of what may be deemed “the smaller fish in order to catch the bigger”.

Cultural activists have blasted bogus traditional healers who use the practice to sexual abuse unsuspecting initiates who are clueless about the ...
News
9 months ago

Two other men were previously jailed in connection with the case.

The first was Sabelo Khubeka. At the height of the search for Shabane and her nephew, after their disappearance, Khubeka had lied about having knowledge of the whereabouts of the children. He tried to extort money from their family when he demanded a ransom.

He was traced to Vosloorus, arrested and upon questioning found to have no clue about the missing children. He was jailed for five years.

The second was Josiah Themba Thubane, a qualified teacher-turned-struggling businessman. Thubane, who claimed to be haunted by his deeds, confessed to his part in killing Shabane, admitting it was a muti killing. He had allegedly been told that getting the body parts of a person with albinism could assist in boosting his struggling business.

He pleaded guilty on all charges, including two counts of premeditated murder, two counts of kidnapping, housebreaking with intent to commit murder and one count of violation of a corpse. He was handed two life terms for the killings.