Princess of Monaco thanks SA doctors for treating her 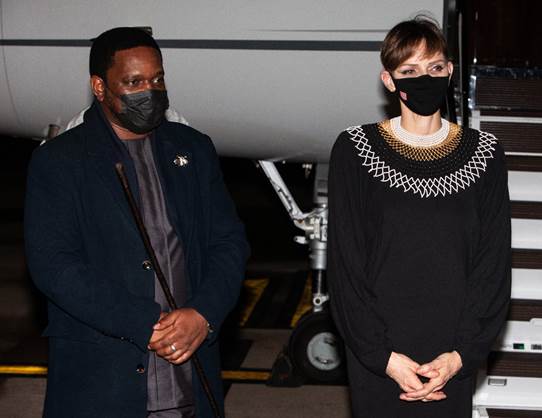 Wearing a black, white and gold beaded collar necklace with a free-form long black dress for her flight from Durban’s King Shaka International Airport, she said: “I am looking forward to reuniting with my six-year-old twins, Jacques and Gabriella, and husband, Prince Albert.”

The princess came to SA in March to attend the funeral of the late Zulu king Goodwill Zwelithini. Charlene recently thanked the prince in an Instagram post for his “kindness and support”.

In May, the Royal Palace of Monaco released a statement saying she was unable to leave SA after contracting an ear, nose and throat (ENT) infection. The former Olympic swimmer was here to raise awareness about rhino poaching when she took ill.

“It has been very challenging to be here but at the same time it has been wonderful being back in SA,” the princess said.

“I’d like to thank the doctors who have done a tremendous job helping me.”

A special word of thanks from HSH Princess Charlene of Monaco as she prepares to return to Monaco.

On Monday her foundation confirmed she had been hospitalised “many times after contracting an ENT infection”, adding that due to the medical procedures, she was prohibited from travelling by air, which resulted in her extended stay in the country.

“The extra time in SA, however, was put to ‘extra’ good use.

“Since being in SA, HSH Princess Charlene was extensively involved with her foundation initiatives, with a particular focus on #chasingzero, #educate2gether, and #feed2gether.”

During her stay, she was involved with conservation operations including rhino monitoring and tracking, deployment with the Anti-Poaching Unit, educational wildlife photography sessions, and a white rhino dart and dehorning exercise on a safari in KwaZulu-Natal.

She also focused on water safety initiatives for children and joined hands with golfer Louis Oosthuizen’s iPapa57 Feeding the Children programme, which supports community centres in the Mossel Bay area.

The royal family has been in turmoil since the death of King Goodwill Zwelithini kaBhekuzulu earlier this year, with disputes over his successor ...
News
11 months ago

Of the princess’ health, the foundation said: “She has recovered well, is healthy and is looking forward to reuniting with her family.”

On her departure Charlene said: “SA has, and always will be, in my heart. Every time I visit this beautiful country, I am filled with immense joy and pride. I want to thank everyone for being so hospitable and supportive during my time here.”