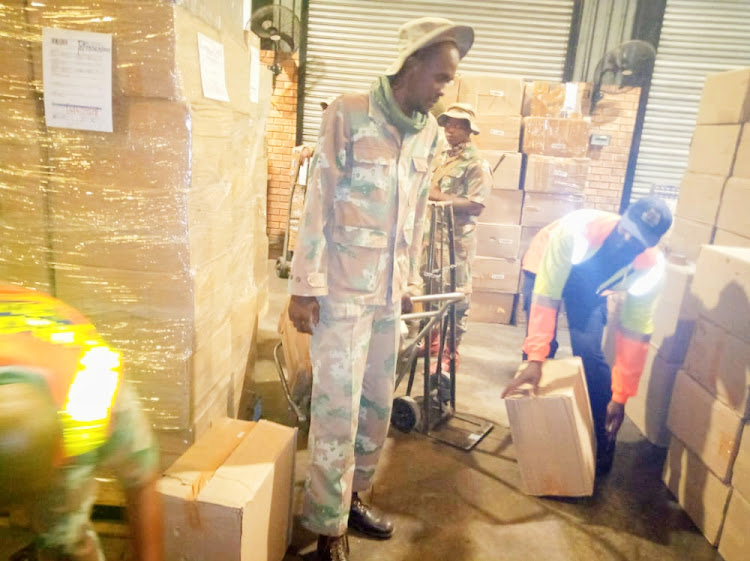 Members of 4 Artillery Regiment confiscated illicit Remington cigarettes valued at about R245,639 on the SA-Zimbabwe border this week.
Image: SANDF via Twitter

Four out of 10 stores nationwide (43%) are selling illegal cigarettes, and in two provinces this increases to 75%.

Cigarettes are selling for as little as R8 per pack, which is a third of the minimum collectible tax (MCT), says British American Tobacco SA (Batsa), citing Ipsos research.

“SA’s rampant trade in tax-evading cigarettes has hit record highs as brazen manufacturers, smugglers and traders defy the efforts of law enforcement agencies to stem the tide,” the company said on Tuesday.

The data was released as the military said members of 4 Artillery Regiment confiscated illicit Remington cigarettes valued at about R245,639 this week.

“During this operation, soldiers saw a group of men crossing the SA/Zimbabwe border into SA,” the military said.

Ipsos researchers have found that at least two-thirds of stores in four hotspot provinces are selling cigarettes below the MCT level of R21.60. That number rises to three in four stores in Free State and the Western Cape.

An illicit cigarette smuggler has been jailed for five years after being smoked out in a police undercover operation.
News
4 months ago

“Over a year since the disastrous lockdown sales ban, the illegal networks it enabled and enriched continue to dominate the retail sector. They are destroying legal jobs and livelihoods and depriving the Treasury of R19bn in cigarette excise for 2021 alone.”

Moloto said efforts by the SA Revenue Service, police and army to disrupt the cartels have merely scratched the surface.

In its fourth investigation of the year into the tobacco trade, Ipsos found in the past four months:

The latest Ipsos fieldwork was carried out from October 8 to 15 and follows similar studies in March, February and June.

The Remington Gold brand was the most prevalent and selling at below MCT in two-thirds (59%) of instances.

Moloto said to stamp out illicit trade, Batsa is calling for the immediate introduction of a minimum retail sales price of R28 for a pack of 20 cigarettes and stricter controls of all manufacturers and borders. It would also like to see the adoption of a comprehensive track and trace system for the tobacco industry.