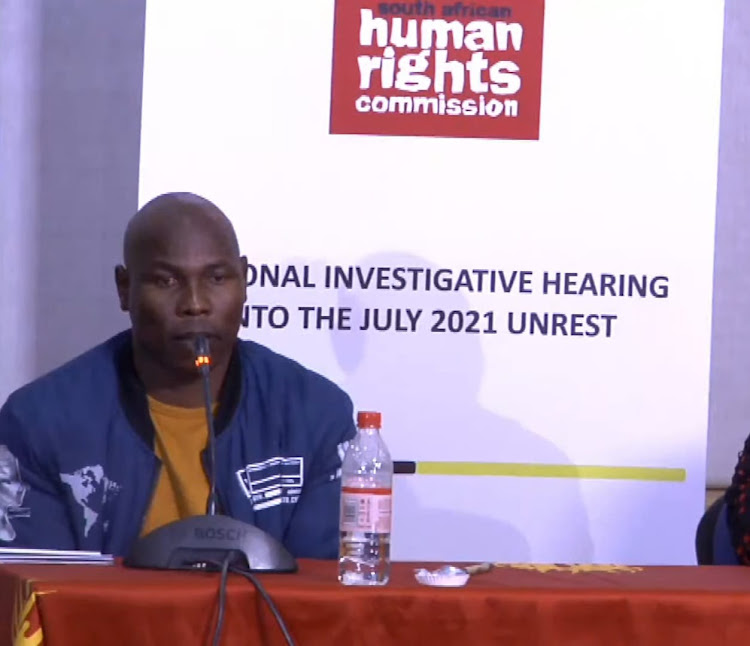 Bongani Mkhize was shot in the back by unknown men during the unrest in KwaZulu-Natal in July.
Image: supplied

Bongani Mkhize crawled on the N2 freeway and hid under a bridge after he had been shot near Wentworth, south of Durban, during the unrest in July.

The Umlazi father was travelling from a Montclair garage towards Umlazi when he had to run for his life on July 14.

Testifying at the SA Human Rights Commission (SAHRC) hearing into the riots and looting that swept through KwaZulu-Natal and Gauteng, Mkhize said he was stopped by the occupants in a vehicle allegedly marked Crown Security while on the freeway.

He said the two men, who had been in the security vehicle, demanded that he unlock the doors so they could search his car.

Mkhize said he obliged. He got out of his vehicle and stood at the driver’s side of the car.

A white unmarked vehicle then arrived.

“Three coloured men jumped out of the vehicle. I then heard a gunshot,” Mkhize said.

He said the three men started firing shots at his car.

“I could see the shots hitting the vehicle and passing me. I ran,” he said.

National police commissioner Gen Khehla Sitole testified before the SAHRC hearing on Monday that July's unrest was a "planned gathering with an ...
News
1 week ago

Mkhize testified that one man from the security vehicle asked why he was running, while the other three men gave chase and continued shooting at him.

“I ran on the freeway and they chased after me. As I was running, I collapsed because I had been hit on my lower back. I had been shot. When I fell I couldn’t stand up. I crawled and held onto the steel barricade on the road. I hid behind poles holding up the barricade.”

The three men then stopped another passing vehicle.

“When they were focused on that vehicle, I crawled towards the bridge,” said Mkhize.

While hiding under the bridge, Mkhize called his son to tell him he had been shot and needed help.

Mkhize’s son and his brother arrived in the area but could not get to him because the community had barricaded roads in Wentworth.

“They tried to get to me but couldn’t. Finally they got hold of metro police who escorted them to the location. When I saw them in the company of police officers I was able to come out from hiding. The police asked me what had happened. I told them. The police said they witnessed that people could not drive through that area due to the barricade,” he said.

Mkhize was admitted to Prince Mshiyeni Hospital in Umlazi for treatment.

He said he could no longer work as a bus driver due to the severity of his injury.

Mkhize told the commission police have not started investigating his case.

“I was very saddened about my situation. However, because I have my family, that gives me great support. I have learned to accept the situation. I am living it. I realised it is not going to help me to carry on being sad.”