Police on standby to deal with possible unrest in KZN, parliament hears 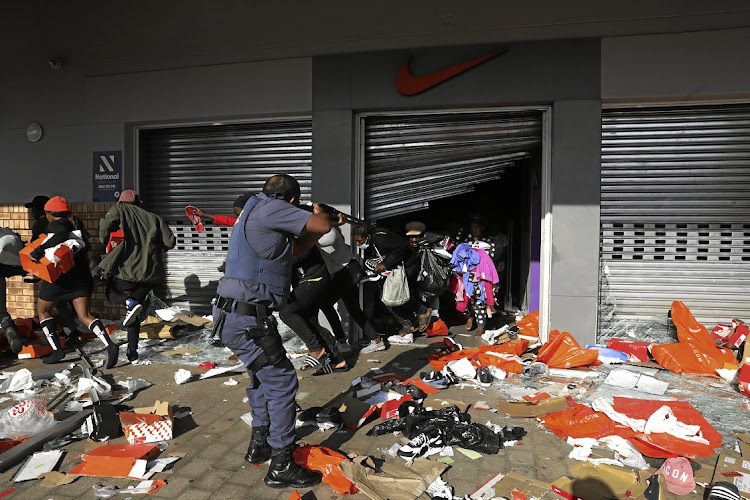 Looters flee from a police officer at a shop in the Springfield Value Centre in Durban. File photo.
Image: Sandile Ndlovu

The police are on standby to deal with possible unrest in KwaZulu-Natal this weekend.

Deputy minister of police Cassel Mathale told parliament on Wednesday they were aware of intelligence information of possible looting in the province and that the government was adequately prepared to respond to those threats.

“It is true that we are aware of the possibilities of what might happen because we are working very closely with the intelligence community,” he said.

“We are sharing information with the state [security] agency and the defence and we are quite certain that we will be able to respond should something like this happen that we were not able to adequately respond to previously,” said Mathale.

He added that police officers from different provinces were on standby, and if there was a need to deploy extra police to areas affected, the state would do so.

“Yes indeed, the response to the previous riot left much (to be desired). We could have done more and out of that environment, we have learned our lessons.”

Civil unrest: Majority of smaller claims to be paid by month-end

Sasria said it is determined to settle 80% of all claims between R1m and R30m by the end of October.
News
1 month ago

He was responding to a question from IFP chief whip Narend Singh, who asked whether the police would be able to deal with such unrest this time around.

“Given the utterances of the police commissioner recently that during the unrest, SAPS was understaffed and gathering intelligence was a weakness, and given that there are reports and information circulating currently, that there are possible threats of looting on Friday and the weekend in Pietermaritzburg and Durban areas ... will SAPS be ready to deal with these kind of issues if there is such as reported by intelligence?” asked Singh.

He said police from different stations in KwaZulu-Natal were calling meetings with community policing forums and community organisations about this.

Singh did not elaborate about the origins of the threats.

Responding to another question about police capacity to respond to similar unrest, Mathale said contingency plans have been put in place in areas that were affected by the violence, the effective flow of crime intelligence had been secured, and intelligence is communicated to all relevant stakeholders on a daily basis.

Mathale said to ensure that capacity is enhanced, public order police (POP) officers were receiving training in the SAPS academy and officers who are already trained were being exposed to refresher courses

“It was evident from the July unrest situation that adequate numbers of POP members are required to do crowd management and measures have been put in place to ensure that equipment and vehicles, including armoured vehicles, are maintained and ready for operational deployment should the need arise.”

The police have meanwhile asked the public to ignore social media posts that have gone viral about the possibility of looting during Black Friday.

According to the message, those responsible for looting in July might try to use Black Friday as a pretext to enter the stores and cause mayhem.

However, KZN police spokesperson Brig Jay Naicker said: “Please ignore messages circulating on WhatsApp or social media platforms that seek to create panic in the community and encourage people to participate in any form of criminality. If there are any serious threats that we are aware of, we will issue an official statement and post such on this group.”

Community policing forum groups informed members to take precautions but not to “overreact to this bad news as, hopefully, nothing will happen”.

One group said: “We have had unverified messages that there will be rioting with the Black Friday Sales that are to happen this week. This message is unverified and nobody has taken responsibility for writing the message. We do not think anything of this nature will happen. SAPS, metro, security companies and neighbourhood watches are all on high alert and are ready should this happen.

“Please do not panic and please do not share or circulate unverified messages. Your neighbourhood watches know what to do and they have protected you in the past so please trust that they know what they are doing and will keep you posted if there is anything to share.”