Insurer advice on how to minimise losses due to severe weather 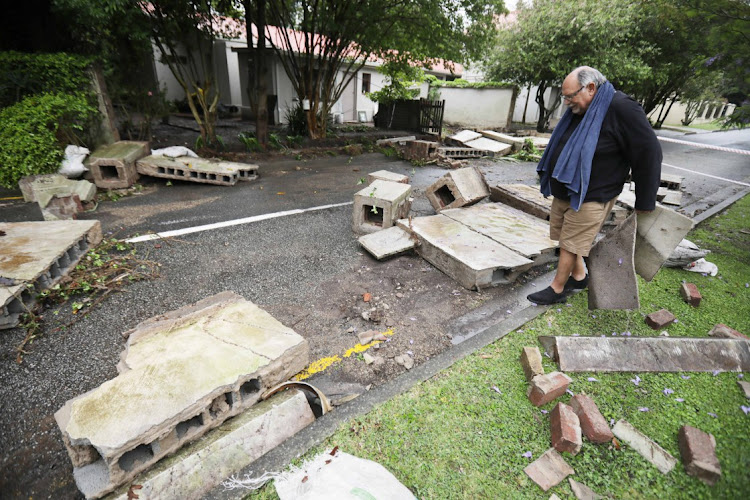 Leon Eady's perimeter wall in Heatherlands gave in as the water gushed through his home after heavy rain in George on Monday.
Image: ESA ALEXANDER

A short-term insurer says it has already received 41 claims, two of which are for damage to property (non-motor claims), as a result of the severe weather in parts of the Western Cape.

“We are expecting more motor claims to come in as the severity of the storm spreads to other areas of the Garden Route, the coast and the Southern Cape,” said Lizo Mnguni, spokesperson for Old Mutual Insure.

Major roads in George on the Garden Route were under water after heavy downpours which resulted in flooding on Monday, with some losing all their possessions in a muddy deluge, while one man was killed near Mossel Bay when his vehicle was caught in the rising water.

Cleanup under way as floods subside in George

Floods have subsided and the clean-up has officially kicked in, the George municipality said on Monday evening.
News
1 week ago

The insurer has urged people to do comprehensive maintenance checks on their vehicles and homes.

“The only option when storms are upon us is for home and vehicle owners to be proactive, which can lower the possibility of damage to their belongings as a result of extreme weather conditions,” said Mnguni.

Mnguni said they have already put additional measures in place to ensure that claims are expedited as quickly as possible, including adding three more dedicated claims assessors to the team.

An elderly man became the first fatality along the flooded Garden Route on Tuesday morning, when his vehicle was swept away on a low-lying bridge in ...
News
1 week ago

He said homeowners and vehicle drivers should conduct a thorough risk-management checklist to mitigate damage to possessions ahead of the expected storm.

“Checking tyres before driving in wet weather is also extremely important. It could result in an insurance claim being rejected should the insurer determine that the cause of an accident was a direct result of poor tyre maintenance,” he said.

He said it is also important to know where the house’s shut-off valves for the main water supply are, should water damage occur.

“Check your gutters and drainpipes to avoid leaves and other debris from clogging them up and damaging your home’s exterior siding. Also unplug all electronic devices, including cellphones, laptops and Wi-Fi routers to prevent serious damage to these devices should you experience lightning.”

The Western Cape government has urged residents in the southern Cape to stay indoors in areas affected by heavy rainfall and flooding as rescuers ...
News
1 week ago

Mnguni also suggests having emergency home assistance in place and emergency numbers on speed dial in case of an incident at home, such as flooding, or a tree falling on the roof.

He said home assistance services can add tremendous value during storms to homeowners who experience any type of emergency.

“If you cannot avoid being on the road during predicted storms, check that you have emergency driver assistance in place and have emergency numbers on hand in case of an accident or breakdown — especially as rainy weather increases motorists’ chances of incidents.”