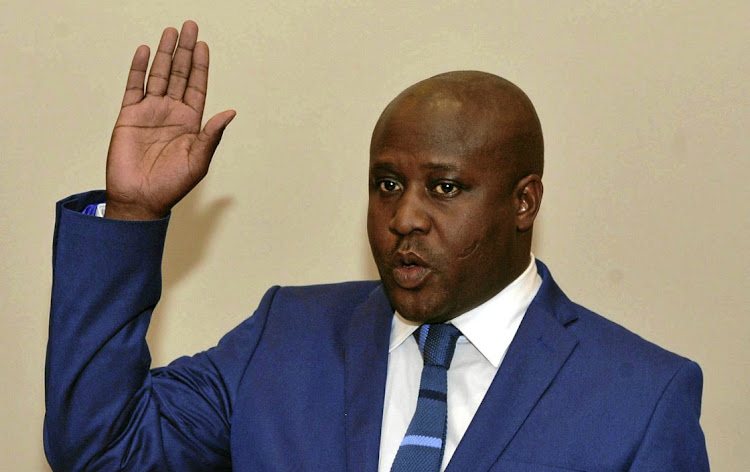 The NPA believes there are reasonable prospects that another court, notably the Supreme Court of Appeal, would find there were material misdirections on questions of law when Western Cape judge president John Hlophe acquitted ANC MP Bongani Bongo (pictured), on a charge of corruption. File photo.
Image: Elmond Jiyane

The National Prosecuting Authority (NPA) has challenged the decision made by Western Cape judge president John Hlophe in February to acquit ANC MP Bongani Bongo on a charge of corruption.

Hlophe dismissed the case after lawyers for Bongo filed a section 174 application, at the end of the state’s case, on the basis there was no evidence on which a court would reasonably return a finding of guilt.

The state had alleged that on October 10, 2017, Bongo had offered an undue gratification to Vanara for him to fake illness or assist the accused to delay and/or stop parliament’s inquiry into Eskom’s affairs.

Section 174 of the Criminal Procedure Act provides that if, at the close of the case for the prosecution in any trial, the court is of the opinion there is no evidence the accused committed the offence referred to in the charge or any offence of which he may be convicted on the charge, it may return a verdict of not guilty.

Removal of Bongo, who faces corruption charges, is among several changes to the heads of portfolio committees announced by chief whip Pemmy Majodina
Politics
8 months ago

In his judgment finding Bongo not guilty and discharging him, Hlophe said Vanara was a single witness to the incident that gave rise to the charges levelled against Bongo.

Hlophe said the other state witnesses were not present when the meeting between Vanara and Bongo took place.

“They can only attest to what Mr Vanara relayed to them regarding the meeting between himself and Mr Bongo,” Hlophe said.

The NPA has indicated it will make an application to Hlophe, on a date to be allocated, to reserve questions of law for the Supreme Court of Appeal (SCA) relating to his judgment.

The NPA listed nine questions of law to be reserved for the SCA.

One is “whether the trial court correctly applied the test in terms of section 174 of the CPA to the evidence led”.

Another is “whether the trial court correctly applied the elements of the offence of corruption when the court indicated it had difficulty accepting Vanara’s evidence as he lacked the power to stop the inquiry”.

Freedom Under Law admitted as a party in Hlophe litigation

Freedom Under Law’s investment in the litigation over the possible impeachment of Western Cape judge president John Hlophe is “palpable”, the ...
News
5 months ago

“We are of the view there are reasonable prospects that another court, notably the SCA, would find there were material misdirections on questions of law.

“We are of the view the public outrage against corruption and the impact the findings have for the application of the law related to corruption are compelling reasons why the SCA ought to hear the appeal,” the NPA said in its heads of argument.